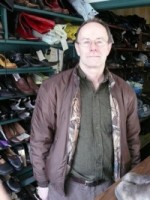 Most of us throw out our shoes if the stitching tears or the sole wears. What about that pair of shoes we just can’t bear to throw away? Professional cobbler Kevin Wright can help. Wright is one of the few people in Newfoundland and Labrador who specializes in shoe repair. His shop – The Modern Shoe Hospital – is located in downtown St. John’s. He is a tradition bearer in the making and repairing of shoes, a learned tradition stemming from years of apprenticeship.

The shop has been in operation since 1930. The business was then owned by Ernest Windsor and Sid Wright and operated out of a space on Water Street. Sid was Wright’s Uncle. Since then the store has moved around downtown until 1951 when the business moved to its current location on Duckworth Street.During the Second World War, there were thousands of men in St. John’s who needed their shoes repaired. “There were probably six or seven repair shops in St. John’s in the 1940s,” describes Wright.“In the early 1990s a man came into my shop and told me that he used to be in the merchant marines during the war. He said he had frequented the shop back then and was surprised to see that it was still here.”

In 1972, the journey began for Wright, whose father worked in the shop at the time. As a young apprentice, Wright worked on weekends alongside his father and Sid Wright. For years, Wright was responsible for pulling the old heels off shoes with a pair of pliers and gluing shoes. “Once I entered university, I had a bit more free time to work in the shop. I started working in my spare time during the week and that’s where I stayed,” explains Wright. “Fixing the heel top was the most common repair when I started, or perhaps resoling shoes.” The tools of the trade have remained the same.

Wright uses machinery in his shop that has been there as long as he can remember. Some common tools are shoe stretchers, a leather needle, and a cobbler’s knife. “Though most of the modern shoes I repair now are more expensive types of footwear, the old machinery serves the purpose,” says Wright. A design change in the modern shoe has affected Wright’s business. A lot of the modern shoes have a molded sole, which is uniform and difficult to repair. “I would try to repair a pair of shoes that cost more to fix than to replace,” explains Wright. “Many of these soles actually have a shelf-life of two to three years before the sole breaks down.”

Yet, Wright still has a constant customer base. “The high heels are back now and that adds to business,” says Wright. Kyra Sexton, a customer of Wright’s, said “ I often take my shoes down there (Kevin’s shop) when the tap has broken off the heel. He does a really great job fixing them up and it’s cheaper than throwing out a pair of perfectly good heels”.

Kevin does more than just fixing ladies high heels though; he says “A lot of people have orthopedic needs in their footwear, like building up the sole. I also used to repair a lot of hockey gear, especially when the St. John’s Maple Leafs were here.” Shoe repair has been a tradition in Wright’s family. It was passed down from person to person to continue the cobbler trade.

“It’s hard to pass an opinion (on what makes a quality shoe) unless you know what you’re looking for,” said Wright. When asked if there was a future in his tradition of shoe repair Wright was adamant. “Well, as long as there is footwear there will always be a need of repair. You wouldn’t just throw out a pair of shoes that cost just a few dollars to stitch.”

So, you heard it from the source readers, dig out those shoes from the back of the closet and visit Wright at The Modern Shoe Hospital if you’re in need of a good cobbler. You can also check out http://tinyurl.com/kevinwright for the full interview about his tradition.