Local farrier Kevin Dillon on the tradition of shoeing horses. 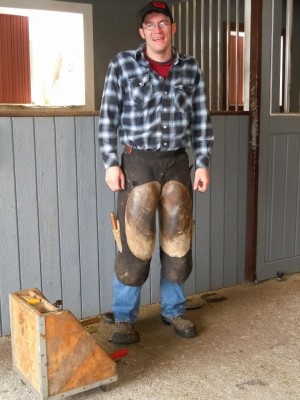 Local farrier, Kevin Dillon, works with the Royal Newfoundland Constabulary’s Mounted Unit Horses. Originally from the Goulds, just outside of St. John’s, Kevin says his job means “ I put the shoes on horses, I also do some corrective trimming and I’ve been at this for about 10 years now.”

Kevin started learning this traditional skill from a local man in the Goulds, Dave Pack, that had been shoeing horses for about 30-40 years. “He taught me for about 3 years before I went on my own. He started by letting me take off shoes for a couple of months, and then each time he let me do something more and a little different. Eventually he let me nail shoes on and such.”
Kevin remembers his first experiences with shoeing. “ I was quite nervous and took a long time to do the horses. I guess I was frightened I was going to make the horses sore and having some handfuls of horses that weren’t so easy to do. I’ve had one horse in particular who beat up my truck when it got a fright, busted out of the chains, and ran right into the back of my truck” says Kevin.


Kevin also has some other interesting experiences throughout his shoeing career. Kevin says “One time I was working on a horse out around the bay and I took off a shoe only to find out the last person had the shoe on backwards. That was different! I had another horse where I picked up the foot and it fell over. That was pretty funny. That one just got back up and I started again.”

The horses, according to Kevin, respond differently to the process of having Kevin work on them. He says “Most of them are pretty good about it. The younger ones that aren’t used to having it done are a little bit of a handful but they get better at it as they get older.

Young horses are not accustomed to being shod.

“A lot of them are trying to jump around and kick you, and the occasional one will try and bite you but that’s all they do,” says Kevin. “I got kicked a nice few times and when that happens you don’t really want to mess with another one that day.”

Kevin starts his day off by feeding his own two racing horses then he begins his day shoeing. Kevin says “ I probably do about 3 or 4 horses a day. Each horse takes about an hour to an hour and a half.” Kevin has specific tools for the farrier trade. Kevin discusses some of them saying “We have an anvil which is for shaping the shoes. A set of pull-offs for hauling the old shoe off. A set of nippers for trimming the feet. A knife for trimming up the sole of the foot. A rasp for filing off the old hoof and making everything all level. And a hammer.” For protection Kevin wears an apron which protects his legs. 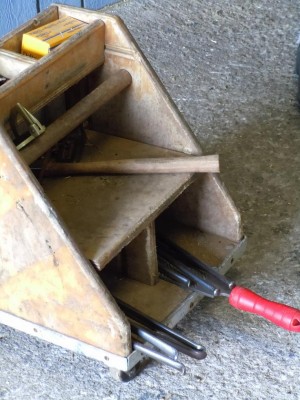 Kevin begins the process of shoeing by removing the old shoe. He then trims up the feet and makes sure they are level and the same length. Then he finishes the process by nailing the shoes back on. The horses are usually good for about 6 weeks before Kevin needs to see them again. “It’s important to keep the shoes level so they can walk and everything is the same. If a shoe is off, some horses can get sore from it” says Kevin.

There are different techniques that Kevin uses for shoeing horses. For example, Kevin says “On a race horse you have to tip their angles so that they don’t interfere with each other so they don’t hit their legs together and such. Mounted horses are pretty straight forward, there’s not special trimming or anything with them.”

Kevin has been shoeing the Mounted Unit’s horses for about 3 years. The former farrier, Jim Hansford, recommended Kevin to take over the work. The RNC Mounted Unit values the work that Kevin does with their horses. Constable Coombs spent time speaking about how Kevin works with him and his horse for special needs. Constable Coombs says “Kevin is really helpful about helping me deal with the horse’s foot problems. The streets of St. John’s take a tole on their (the horses) feet. Mine in particular has the worst feet out of all of them. We have a saying here at the Mounted Unit ‘No foot, No horse’. It’s important that we have a good farrier.” 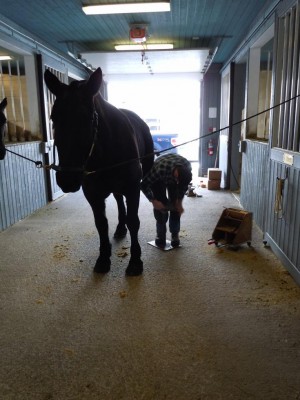 There are two major types of farrier work, however, Kevin says “ Nothing big has changed in shoeing, there are a lot of different tools coming out that make the job easier and different types of shoes that’s about it.” For example, Kevin’s pull offs can not only be used to haul the shoe from the foot but also to widen shoes instead of using the anvil. The shoes themselves have changed some too. “Before there were only self-shape shoes but, now you can get pre-shaped ones which make it a bit quicker, shaped for the front and the back.”


There doesn’t seem to be much change in the tradition since it’s started, every book you read now and the old books all have the same stuff. It’s remained pretty consistent. The only main difference is you can do hot-shoeing or cold-shoeing. Hot-shoeing reqires a forge and heating up the shoe to put it back on the foot while hot, which levels it out. It’s more common up away. I thinking there’s only one person here (int Newfoundland) who does it. It’s easier to level a horse’s foot with the hot-shoe than with a cold-one but, that’s the only main difference between the practices.

The farrier community is very small on the Avalon. There are only about 5 or 6 people who work constantly as farriers. Kevin worries that the tradition may fade away into the sunset. “I have someone who comes around with me every now and then and it’s hard to get someone who’s interested in doing it. Most of the 5-6 people doing it are getting older. It’s time for some new people to start doing it. I would say it’s at threat because it doesn’t seem like there is anyone who wants to be going at it anymore. I think it’s going to be pretty busy for a few people who are left. There’s probably 200-300 horses in this area alone. I do about 40-50 horses and I even travel to Grand-Falls to do horses there.” 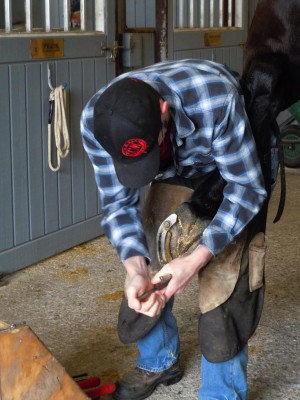 Kevin says “the most important thing about being a farrier is to make sure the horses’ shoes are level and that it’s done properly and the horse is not off.” The farrier tradition is passed on through apprenticeship and word of mouth. Though there are tangible skills and tools needed the job itself comes from the knowledge of the person before. It’s important that young people like Kevin are continuing to make a living doing a job that requires not only physical skill but great concern about the people and animals they work with.

To hear Kevin's Interview with the ICH office please follow the link to the DAI/ICH Inventory : http://collections.mun.ca/cdm4/item_viewer.php?CISOROOT=/ich_avalon&CISOPTR=4444&CISOBOX=1&REC=1