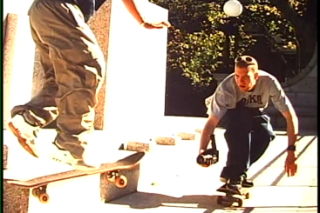 Twenty years ago skateboarding in St. John's was a much different scene than it is today. From the 1990s to the early 2000s street skateboarding was at the peak of popularity. Although there are city by-laws which made it an offence for a person to operate a skateboard in many public spaces, skaters vehemently resisted this. During that time, downtown St. John's was not recognizable without pockets of skateboarders. The clack of wheels along asphalt or the scrape of a board down a metal railing were common background noises in popular skate spots like the War Memorial, Atlantic Place and the Colonial Building. Skateboarders were looked upon as a nuisance in the city and many measures were taken to stop them. For example, fines were issued and the War Memorial was "capped" with stone while the large stair set in front of Atlantic Place was reduced to just a few steps. Many of the measures to deter skateboarding in the city were ineffective and real change did not come until the first skate park was constructed behind the old Memorial Stadium in 1998. Today that street skateboarding scene no longer exists in Newfoundland and as a means of preserving the memory of this subculture the Intangible Cultural Heritage Office has created the ICH skateboarding collection.

Check out the Skateboarding Collection on the DAI