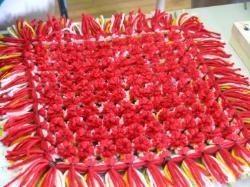 tops were traditionally crafted by men working in the lumber camps and given to girlfriends, wives and mothers. Women also made these in various sizes and used them around the house as pillow covers, table toppers, pot holders, chair backs and mats. This interesting Newfoundland craft is known in Bonavista Bay, the Burin Peninsula and the Northern Peninsula. In Placentia west the pillow tops are known as bakeapple blossom cushions as the common colours of wool available (pink, green, and yellow) gave them the appearance of a bakeapple. Pillow tops are also commonly referred to as cushion tops and pompom cushions. 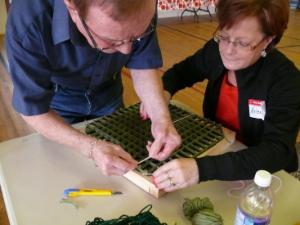 While there are different methods of making these pillow tops, it always begins with a handmade square wooden frame, usually no less than 12”x12” in size. This frame has a number of nails all around the border, left protruding from the frame. Wool is taken 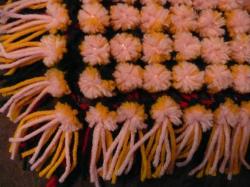 and wrapped around the head of a nail and crossed back and forth from one nail to another until the entire frame is filled. When there is enough wool on the frame, the wool that crosses over is cut with a razor blade and rubbed with the fingertips until it spreads out and forms little balls. The same kind of knots used by Newfoundland fishermen on their nets are used in the making of pillow tops and some makers even use a flat twine needle.