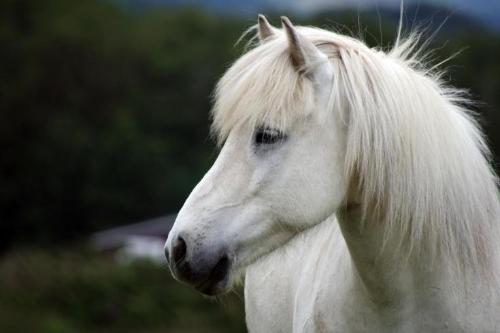 The Newfoundland Pony is the only designated heritage animal in Canada. Standing between 11 and 14.2 hands high, the ponies evolved from many different pony types throughout our islands history. These noble animals are of a hearty breed, withstanding the cold winters and limited vegetation available to them. Sturdy, flint hard hooves allowed the pony to overcome the treacherous terrain in our province. The pony was crucial to the development of our province as it provided our ancestors with both transportation and help with burden work. Hauling sleighs full of wood for wood stoves out of a woods thick with snow in the winter, helping plough our rocky earth for planting sustenance in the warmer months, pulling carriages to bring families to mass on Sunday or to doctors in bordering towns during times of illness.

When modern forms of transportation and farming equipment became available throughout the island, between the 1950s and 1960s, the dependence on the Newfoundland Pony became moot. Large numbers of ponies were sold for meat in mainland Canada and soon the population was falling drastically. It is currently estimated that there are about 400 ponies left in total with many of these ponies falling into the gelding or elderly categories. With significantly smaller numbers able to be bred the Newfoundland Pony is considered Critically Endangered by Rare Breeds Canada.

Featured above is Max (Maximus of the Avalons’ Lucky Seven). Max is owned by Peter Halley of Spirit of NL. He is a 10 years old, 14.2 hands high, and weighs approximately 800lbs. Max is a radical changer, referring to the fact that his coat changed in color from the time he was born, as a bay, throughout the seasons for his first five years of life, and is now settled with a beautiful light grey coat.