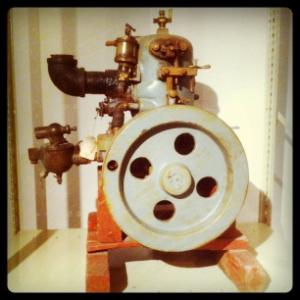 There is a distinct sound that can be heard on the waters around Newfoundland and Labrador, putt-putt, putt-putt; the sounds of an antique make and break? engine cuts through the air. At one time this sound was ubiquitous to small fishing communities throughout the province, but now the rhythmic chugging of the make and break is to be cherished when heard.

Make and break inboard motors were among the first technological advances to help revolutionize fishing in Newfoundland and Labrador. They allowed fishermen to save their strength for fishing, not wasting it on paddling or hauling sails as they had done before. Most often installed in trap skiffs, the hull was first cut away to accommodate water intake and output, which helped cool the engine. The large motor was then bolted to the inside of the boat, usually in a motor house, with the propeller advancing through the stern, driving the vessel forward. These dependable, sturdy, single cylinder, gasoline engines have been called many names, and while make and break is the most common, putt-putt engine, one-lungers,or pik-a-puk, are all used to describe the same type of engine.

Recently, there has been a surge of interest in the antique engines with various locals collecting, restoring, and in a few instances, running these motors. Whether installed in traditional wooden boats or new fiberglass ones, these engines produce an even energy output which allows for smooth and steady, if not fast, travel on the water.

Researched and written by Joelle Carey, May 2012.