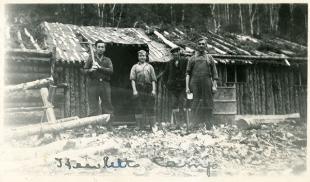 Due to the abundance of harvestable trees in Newfoundland and Labrador, forestry developed as a viable industry and traditions were created and transmitted as a result. Men worked in sawmills, lumber camps or went into the woods around their communities, cutting with a handful of fellow loggers. Many men worked a combination of all of these jobs. Cutting and collecting lumber was arduous work. In the lumber camps men worked from sunrise to sunset every day of the week, except Sundays, several kilometers deep in the woods, in the middle of winter. Living quarters consisted of log cabins with several bunks and a wood stove. Despite the toilsome nature of the logging industry in Newfoundland, there was fun to be had. Many folk songs, particularly satirical songs, practical jokes and other forms of folklore were created in the lumberwoods, often as a distraction from the unforgiving nature of lumbering.

Prior to mechanization of the logging industry in the second half of the 20th century the work was backbreaking. As forestry developed in Newfoundland and Labrador after 1900, pulp and paper production began to dominate the industry. The first pulpwood manufactured in Newfoundland was at Black River, Placentia Bay in 1897. The second pulp and paper operation to open in Newfoundland was the Anglo Newfoundland Development (A.N.D) Company in Grand Falls-Windsor in 1909. In 1925 another large mill was established in Corner Brook by the Reid Newfoundland Company, under the name Newfoundland Power and Paper Company. This mill was quickly sold to the International Power and Paper Company and at one time was the largest mill in the world. The Corner Brook mill was taken over by Bowater-Lloyd in 1938 and as of 2012 is operating today under the ownership of Kruger International.

Check out the Forestry collection on the DAI