"You'd start singing and you would sing all night until it was time to go to bed. Everyone sang and everyone loved it," says Stewart Letto of L'Anse au Clair in a 2003 Northern Pen article on the topic of community 'times'. Letto often sang while seated on the floor because the kitchens of his southern Labrador community were so crowded with people having a 'time'.

Times were informal gatherings that served as the nerve centre of the outport social world. They most often took place over the cold fall and winter months because the fishery occupied people from dawn to dusk in the summer. The entertainment at these social events included singing, dancing, playing musical instruments and storytelling.

Old time concerts, unlike 'times', were organized, more formal affairs involving entire communities and revolving around a specific event like Christmas, Easter or St Patrick's Day. While music was the cornerstone of these performances, concerts also involved skits, dances, drills, recitations and full-length plays. The dramas, songs and tunes were based on published works, but concerts also included local compositions. The concerts took place in schoolhouses and were put off by the children and staff but churches and town halls also provide a venue for these events.

Patricia Smith from Heart's Content describes the lineup of an old-fashioned concert as including "all kinds of skits, but then we have music as well. We have singing and playing of musical instruments and an MC who organizes it all."

Mona Patten from Port de Grave remembers participating in concert "drills" choreographed to live piano or organ music as a concert staple. "The girls would dress usually all alike in paper dresses, made out of crepe paper," she says. "Then you would get on the stage and march in and do various formations and practice and practice until you got it just right."

A dinner often followed the concerts, usually prepared by a women's group associated with a local church. Finally, the live music would continue as the space was cleared for a town dance.

Both 'times' and old time concerts celebrated music, drama and dance, but the food and social aspects were also pivotal to these events. 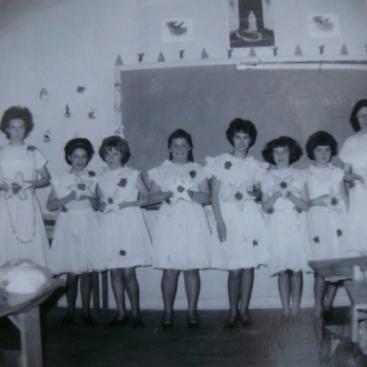 Browse the Concerts and Times collection on the DAI

Back to Performance Arts Page