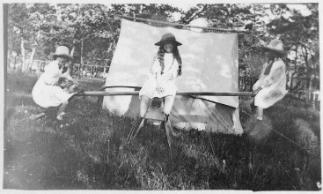 Games and play allow children to develop important social skills and negotiate their world through competition, role-playing, and power hierarchies. Children's games evolve over time and reflect how communities respond to social and economic changes. The introduction of electricity, telephones, movies, television, radio and internet has had a strong influence on the game repertoire of children. As these technologies grew in popularity, children spent less time outdoors playing traditional games such as Rounders, Hoist your Sails and Run, Duck on the Rock or Bandy Ball. This collection of games from across the province explores the folklore of children's games by presenting contextual information, such as rules of play, gender and age requirements, type of equipment used and when and where each game was played. The collection also includes participants' memories of childhood activities, entertainments and other pastimes.

In February 2015, the Heritage Foundation of Newfoundland and Labrador partnered with the Memorial University's Department of Folklore to launch the Hoist Your Sails and Run Project. This project partnered senior citizens with students from Memorial University's graduate Public Folklore Class. The students conducted interviews with the seniors on the games they played when they were children.  These interviews formed the basis of the booklet Looking Back: Games We Played which was launched in March 2015.

Check out Looking Back: Games We Played

Check out the Children's Games collection on the DAI