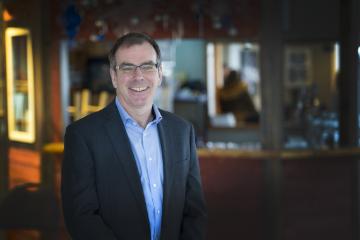 I am a geographer who studies the Canadian landscape from a variety of perspectives, including recent geomorphic evolution, climate change impacts and human-environment interactions. I am a field scientist with a geographical focus in Arctic and Atlantic Canada.

In chronological terms, my program of research extends from the Pleistocene glaciation (the most recent Ice Age) to the present-day. My record of scholarship ranges from cultural adaptations to climate change of prehistoric peoples to health impacts of urban geochemical landscapes.

Over my 30-year career, I have created a unique intellectual signature of innovative interdisciplinary research that characterizes a particular and distinctive approach to understanding how environments have changed in the past and the impacts of those changes on natural and human systems.

The SmartICE sea-ice monitoring and information service was developed with Inuit to integrate their knowledge of ice safety with new community-based monitoring technology and satellite imagery—a world’s first in climate change adaptation.

The basic premise of the Coastal Archaeological Resources Risk Assessment is that coastal heritage is at risk from climate change and heritage managers are largely unaware of the magnitude of the issue or what should be done about it.

The primary objective of the LeadNL bio-monitoring survey was to determine if there is an increased exposure for children to residential lead in older housing stock in St. John’s.

Lake Melville: Avativut, Kanuittailinnivut (Our Environment, Our Health):
The primary research objective was to understand how the Muskrat Falls hydroelectric development would impact the Lake Melville ecosystem and Inuit who depend on it for their wellbeing.

Wilson, K.J., Arreak, A., Itulu, J., Sikumiut, Ljubicic, G.J., and Bell, T. “When we’re on the ice, all we have is our Inuit Qaujimajatuqangit”: Mobilizing Inuit knowledge as a sea ice safety adaptation strategy in Mittimatalik, Nunavut. Arctic.