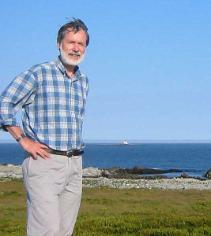 I have worked as a consultant in the private sector, as a lecturer at the University of British Columbia, as a research associate at Uppsala University in Sweden, as a flume lab technologist at the Geological Survey of Canada (GSC), and part-time as a lab demonstrator and janitor in my student days. I also worked as a student field assistant with the Arctic Institute of North America in the St. Elias Mountains and with the Geological Survey of Canada on Baffin Island, on Melville Island, and in the Mackenzie Delta. I came to the Atlantic Geoscience Centre (now GSC-Atlantic) at the Bedford Institute of Oceanography as a research scientist in 1981.

I am a strong advocate of interdisciplinary and collaborative approaches to research. Geography as a discipline is particularly relevant today as the need grows for applied science input to public policy, hazard assessment, adaptation planning, and sustainable development.

Study areas have ranged from the Yukon coast and Mackenzie Delta area to the central and eastern Arctic, Hudson Bay, Lake Winnipeg, eastern Québec, the Atlantic Provinces, and Ireland. In the mid 1990s, I was seconded to the South Pacific Applied Geoscience Commission, conducting applied research on coastal management issues in Fiji, Kiribati, Niue, and the Cook Islands. Over the past decade, I have been involved in projects on coastal impacts of climate change in the Canadian Arctic and Atlantic Provinces. In 2005-2006, I was the program manager for climate-change research activities in the Earth Sciences Sector of Natural Resources Canada.

I have been a Lead Author on Working Group II of the Intergovernmental Panel on Climate Change (Third and Fourth Assessments) and an Expert Reviewer for Working Group I. I am a Network Investigator and Project Leader in the ArcticNet Network of Centres of Excellence and collaborating on coastal topographic and bathymetric LiDAR development in the GEOIDE Network of Centres of Excellence. Early in 2005, I was involved in the UNESCO-coordinated scientific response to the December 2004 Indian Ocean tsunami.