Scientists unite to determine environmental lessons learned from the anthropause 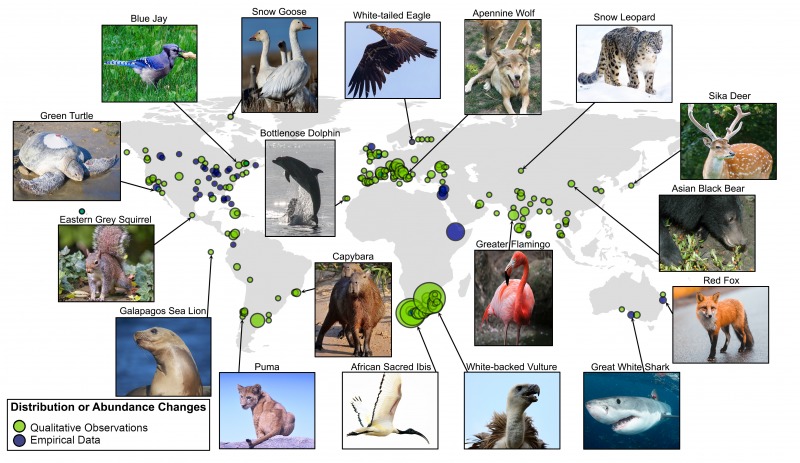 Scientists unite to determine environmental lessons learned from the anthropause

The concurrent confinement of 4.6 billion humans under the COVID-19 pandemic provided a unique opportunity to learn how human pressures impact wildlife and the environment.

Dr. Amanda E. Bates, a marine ecologist at Memorial University; Richard Primarck, a conservation biologist at Boston University; and Carlos M. Duarte, a marine ecologist at King Abdullah University of Science and Technology in Saudi Arabia, joined forces and created a global working group of 340 scientists to study this anthropause — or halt to normal human activity — seeing it as a unique opportunity to explore interactions between human presence, wildlife and ecosystems.

At Memorial University, these researchers included master’s students Brandy Biggar and Mary Clinton and PhD student Cerren Richards with the Department of Ocean Science and Rylan Command, a master’s student at the Marine Institute’s School of Ocean Technology.

Numeric analyses included looking at human movement — plane and boat traffic — and animal monitoring programs, while qualitative anecdotes were tracked to encompass information from media and the general public.

Their findings were recently released in Biological Conservation.

“At a time when most of us were unable to leave our homes, we were still able to connect and collaborate with over 300 scientists from around the world and work together towards a common goal,” said Ms. Clinton.

“This is a great example of how valuable collaborations can be for advancing scientific understanding — and how much we stand to gain from including as many perspectives and ways of knowing as possible.”

The researchers found that, almost immediately, reports flooded into news outlets of wildlife moving into areas normally occupied by humans.

Whales and dolphins were sighted in ports and bays normally overrun with human water activities.

Illegal fishing greatly declined and ocean noise levels and whale-strikes were down from reduced shipping.

Meanwhile seals, deer, horses and penguins all took to the empty streets.

“For me, one of the most striking reports that emerged during this collaboration was the unexpected impact of tourists as guardians for seabirds,” said Ms. Richards.

“It was found that the absence of tourists visiting a seabird colony in the Baltic Sea during lockdown led to a 700 per cent increase in disturbance from sea eagles, resulting in the worst seabird breeding season on record.”

There were also negative consequences, however.

With humans on lockdown, enforcement and patrol were either greatly reduced or completely non-existent — the consequences of which resulted in huge upswings in exploitation.

Pangolin trade seizures were up 500 per cent, while other reports included the hunting of big cats (leopards, tigers, jaguars and pumas), bush meat, raptors, sturgeons and white rhinos.

“Conservation initiatives and the enforcement thereof are crucial to sustaining biodiversity.”— Rylan Command

Many of these reports came from poor regions where residents were undergoing hardship from the loss of income.

Protecting endangered species is a major goal in conservation and without human efforts there were several declines directly related to reduced patrolling.

However, the most significant loss of human conservation effort could be seen in pest control.

“Conservation initiatives and the enforcement thereof are crucial to sustaining biodiversity, and the ecosystems into which we are integrated,” said Mr. Command.

“During lockdowns, community interventions such as beach cleanups, habitat restoration, and pest management ceased, and illegal poaching and hunting, deforestation, and forest fires increased as a result of weakened protection for ecosystems. The negative effects of these changes on biodiversity highlight the positive role of humans as custodians and caretakers of biodiversity — something that is often overlooked.”

The researchers believe human presence ultimately has a very convoluted and mixed impact on animals and the environment and, as part of the global ecosystem, our presence both benefits and causes harm.