Research into animal adaptations may relate to human diseases 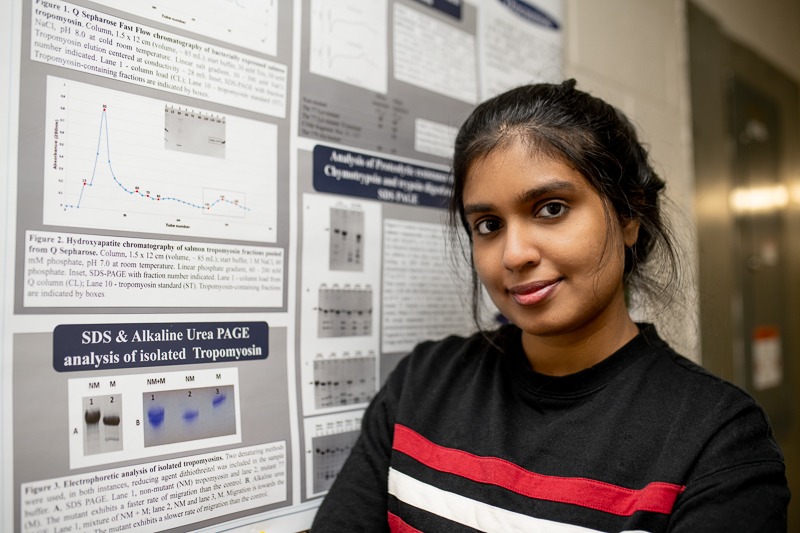 Research into animal adaptations may relate to human diseases

Can the way animals adapt to different environmental conditions provide information about certain diseases in humans?

Madhushika Silva believes it can.

The Memorial student is currently completing a PhD investigating muscle protein structure and function under the supervision of Dr. David Heeley in the Department of Biochemistry, Faculty of Science.

The protein tropomyosin is made of two chains and found in all animals, but particularly in muscles where it forms a spiral-shaped strand that moves during a contraction, says Ms. Silva.

Atlantic salmon, a cold-blooded animal, lives in near zero-degree temperatures during the winter months.

Despite that, its tropomyosin molecule maintains flexibility.

Rabbits, on the other hand, are warm-blooded animals. But their tropomyosin molecules are less flexible in colder conditions compared to salmon.

Ms. Silva has been investigating both animal models to understand how tropomyosin maintains its regulatory function at widely different temperatures.

“I discovered that Atlantic salmon tropomyosin is more than 90 per cent identical to the rabbit homolog, except for a single charge swap – lysine-77 (a charged amino acid) in rabbit and threonine-77 (a neutral amino acid) in salmon,” she said.

“That may carry answers as to why it can maintain function at lower temperatures.”

Ms. Silva says in mammalian tropomyosin, lysine-77 makes electrostatic interactions to atoms in the adjacent chain setting the flexibility of the molecule in tune with a temperature of 37 C, but not that of a marine habitat.

In Atlantic salmon, the threonine-77 doesn’t bond to the surrounding atoms and tropomyosin maintains a looser structure. Almost all animals who live in higher temperatures have this positively charged substitution in tropomyosin.

“To see what effects are generated by this charge difference, I made a salmon tropomyosin mutant with the rabbit amino acid at the 77th position,” she said.

Ms. Silva concluded that the presence of a neutral amino acid at the 77th position destabilizes tropomyosin and provides the necessary flexibility to function in the cold marine environment.

Recently a synopsis of this research appeared in Chemical and Engineering News. The full article was published in Biochemistry.

In addition to learning more about how animals adapt to different environments, Ms. Silva hopes to relate these findings to certain disease conditions, including cardiac issues.

“Tropomyosin is found in all muscles, including cardiac muscles,” she said.

“In a certain cardiomyopathy – a disease of the heart muscle that makes it harder for the heart to pump blood – the same amino acid change, lysine for threonine, occurs at residue 70 in the molecule and causes heart enlargement.”

Ms. Silva’s research could allow understanding of how tropomyosin overcomes the near-freezing water of the North Atlantic Ocean while maintaining the delicate balance between stability and function.

Further, it can also be used to understand the role of amino acid mutations in certain cardiomyopathies.