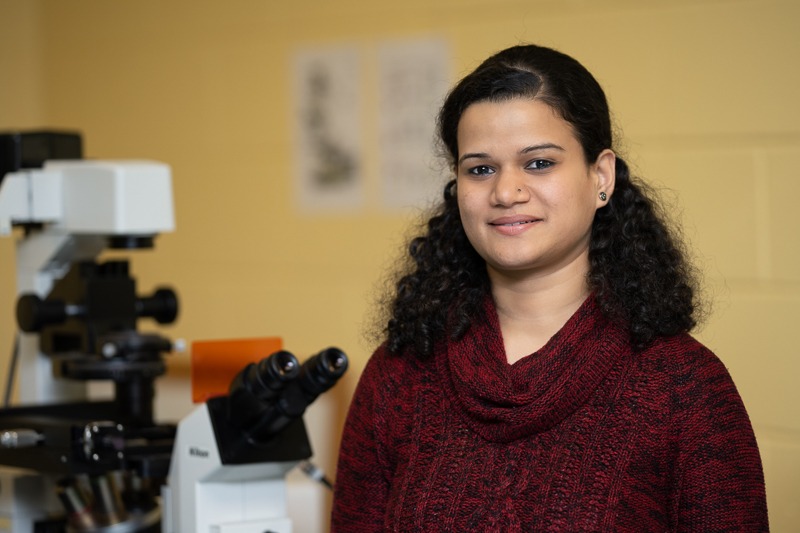 When Shivani Semwal was an undergraduate student in her home country of India, she had no idea what she wanted to do after she finished her program.

“I wasn’t aware of the opportunities out there, but I went on to do a master’s degree because I liked physics,” she said. “However, I still didn’t have a clear plan in mind.”

Through her family network, she met Darshana Joshi, an Indian graduate student completing a PhD at the University of Cambridge. Ms. Semwal says Ms. Joshi became her mentor and helped her realize what she wanted to do.

“After discussing it with her, I decided on a PhD. But, before starting it, I did several internships in India to make sure I wanted to do research. I learned about these opportunities, how to apply for them and how to talk to professors because of the mentoring I was given.”

Dr. Joshi went on to co-found VigyanShaala – Sanskrit for “a creative classroom of science.” The non-profit organization aims to make quality science, technology, engineering and mathematics (STEM) education accessible to the most marginalized individuals across India.

Now a PhD student in her final year in Memorial’s Faculty of Science’s Department of Physics and Physical Oceanography, Ms. Semwal has volunteered with the organization since 2014.

“According to the World Economic Forum, more than 80 per cent of jobs in the next decade will require STEM skills,” she said.

“Our target is to build an ecosystem for young people in India and equip them with these skills, preparing them for the technology-focused workforce of the future.”

It reimagines STEM fields with increased participation from women by equipping female undergraduates with tools to explore the broader possibilities in STEM careers.

It also envisions a self-sustaining and uplifting community of women in STEM, where underrepresented young girls find relatable mentors to guide them in their scientific quest and help break down traditional access barriers.

“There is a leaky pipeline somewhere. We want to fix that and that’s why we are building this ecosystem.”— Shivani Semwal

The program Kalpana consists of the Kalpana Network – SheforSTEM community and the Kalpana Fellowship.

The Kalpana Fellowship within the SheforSTEM community is an opportunity for the most motivated and enthusiastic members of the community to navigate and advance their trajectories in STEM careers.

“In India there is a problem,” said Ms. Semwal. “Out of 10 million STEM undergraduate students, 44 per cent of those are female and of them, only 15 per cent secure STEM jobs. By comparison, 85 per cent of males go on to secure jobs. So, there is a leaky pipeline somewhere. We want to fix that and that’s why we are building this ecosystem.”

The Kalpana Fellowship is an eight-week program connecting female STEM undergraduate students with mentors for a series of workshops and discussions.

Last year, 60 girls from six states across India took part, linking them to 10 mentors from universities around the world.

Kalpana fellows are provided with an opportunity to interact with women making their mark across various STEM careers, who group mentor them to help chart their career paths and acquire relevant skills, as well as experiential STEM learning through a range of projects.

This year, they hope to offer the fellowship to 200 young women.

Ms. Semwal has led the Kalpana Network – SheforSTEM community since February of this year.

She organizes weekly/fortnightly interaction with relatable role models, as well as master classes on a range of topics such as communication (academic and professional), networking, strategic thinking, experimental methods, programming and computational thinking for problem-solving.

“We started with a session called Speak Up Kalpana, bringing accomplished speakers together from across STEM fields to share their personal and professional journeys with our girls,” said Ms. Semwal.

Over the years Ms. Semwal has personally mentored two young women, who have both gone on to success in their fields.

“Darshana helped me back then, and I can relate to these young girls now. I was in this situation myself and I want to give back to the community and help them. If they can realize their dreams, we have achieved something great.”