'L' is for Labrador Trough

The word “trough” has a variety of uses in the English language, but for the most part it refers to a long and narrow feature of some sort. If you are a student of economics you will be familiar with “trough” being used to label the dips between peaks in an economic cycle, and if you grew up on a farm you will be familiar with the use of “trough” to describe the long, narrow object that pigs and other livestock eat from. The “Labrador Trough” on the other hand, while it is connected to global economics and has played a role in feeding many people, is the name given to a linear geological feature that extends for approximately 1600 km between Ungava Bay in the north and the Manicouagan Reservoir in the south.

In geological terms, the Labrador Trough – or the “crust on the Canadian Shield pie” as the late geologist and Labradorian Edmund Montague once called it – is a belt of volcanic, metamorphic, and sedimentary rock, which was formed and transformed by significant geological events – including sediment deposition by ancient rivers and the sea, rifting of the earth’s crust and the resulting rise of magma to the surface, two separate mountain building episodes (known as orogenies), and the subsequent erosion of said mountains – over a period that began approximately 2300 million years ago, during the Precambrian Era.

In addition to this remarkable natural history, the Labrador Trough is also entwined with human history. In 1896 the Canadian geologist Albert Peter Low paddled his canoe along the Labrador Trough, following Minaiku (Menihek Lake) as far south as Ashuanipiu-shipu (Ashuanipi River), and reported on the natural resources of the region, including its iron ore. Following Low’s trip, Mathieu André guided additional prospectors to iron ore deposits in the same region, and by the early 1940s the preliminary extent and quality of the Labrador Trough iron ore deposits had been evaluated by resource developers and governments in Canada. Industrial mining of these deposits became a reality in the mid-1950s with the development of hydropower and transportation infrastructure in western Labrador and eastern Québec, and was also the impetus for the permanent settlement of Innu families in the region and the creation of the communities of Schefferville, Labrador City, Wabush, Fermont, and even Churchill Falls.

The Labrador Trough played a role in the lives of Innu long before they were settled in communities near Schefferville, too. Sedimentary rocks from the Labrador Trough, such as chert, have been found on 1600, 1000, and 300-year-old archaeological sites at Ashuanipi (Ashuanipi Lake), and on other, possibly older, archaeological sites at Minaiku, the Québec North Shore, Kaneiapishkau (Caniapiscau Lake/Reservoir), and Kanuauakanit atiku (Indian House Lake). Innu ancestors quarried these rocks from surface-exposed formations in the Labrador Trough and used them to make stone tools such as spear points and knives, which they used for hunting, fishing, processing foods, and making items such as canoes and snowshoes.

The Labrador Trough has played a significant role in the natural and human history of eastern Québec and western Labrador, and it continues to be vital to the region today.

Innu place names used in this piece were obtained from the Innu Dictionary (http://www.innu-aimun.ca/dictionary/Words). I would like to thank the late Edmund Montague and Daniel Ashini for helping me in my quest to learn about the Labrador Trough. I am lucky to have met you both.

Low, Albert P. (1896) Report on Explorations in the Labrador Peninsula: Along the East Main, Koksoak, Hamilton, Manicougan and Portions of Other Rivers in 1892-93-94-
95. Geological Survey of Canada, Ottawa.

Neilsen, Scott. (2018) “An Introduction to the Archaeological History of Ashuanipi.” North Atlantic Archaeology, 5: 53-90. 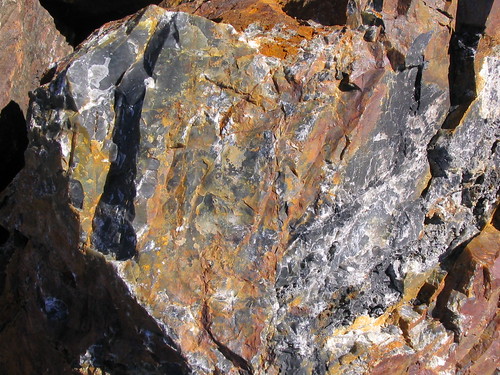