For much of the last two million years, ice has covered Labrador, but it has advanced and retreated to various extents over time. At the last glacial maximum, about 18,000 years ago, Labrador was completely covered by the Laurentide Ice Sheet (Bell and Liverman, 1997). As the ice retreated, it revealed the Labrador landscape that we know today, shaped by the movement of glaciers and the weight of ice sheets (see Figure 1 and 2 for examples of glaciated landscapes).

Fortunately (if you like ice), not all the permanent ice in Labrador has disappeared!

Today, there are still 195 ice masses and glaciers in Torngat Mountains National Park (TMNP) in northeastern Labrador (Way et al., 2014)! The glaciers (or simmik in Inuttitut (Willie Etok in Brown et al., 2012)) and ice masses of northern Labrador are found on land high up in the mountains in protected hollows. These bodies of land ice are formed from recrystallized snow that has accumulated on the ground, with the key difference between the two terms being that glaciers move by flowing down valley (similar to how liquid flows; see Figure 3), whereas ice masses remain inactive. Glaciers can shrink or grow depending on how much ice is accumulated or lost in a given year. The Torngat Mountain glaciers are shrinking and lost a total of 27% of their area from 1950 to 2005 (Barrand et al., 2017) – that’s a relatively small amount of time to lose a lot of ice! If Labrador’s climate continues to change as expected, it is likely that northern Labrador’s glaciers will continue to shrink, but we do not know how quickly this will happen (Barrand et al., 2017).

Ice in Labrador can also be found below the ground surface as ground ice which can occur in areas of Labrador that contain permafrost and/or frozen ground. Ground ice is a general term that we use for any type of ice that is found in freezing or frozen ground. Permafrost is what we call ground that remains at or below 0°C for two or more consecutive years and it often contains ground ice (van Everdingen, 2005). If the permafrost has a lot of ground ice and begins to thaw, it can influence things such as the physical landscape and infrastructure of a region. For example, a structure built on ice-rich permafrost can be damaged if the permafrost thaws and the ground settles (see Figure 4 for an example). If ice-rich permafrost thaws on a slope, it can create a feature called a retrogressive thaw slump (van Everdingen, 2005) which can sometimes be very obvious because it exposes ice formerly hidden under the ground (see Figure 5).

Ice also develops seasonally in Labrador during the cold winter months as sea and lake ice. Sea and lake ice first form in shallow water, in areas with no currents and with low salt content (Environment and Climate Change Canada, 2013). The term ushkatshiu(n) in Innu-aimun is used for this first layer of ice that is thin and transparent as glass (Mailhot et al., 2013). Once formed, the ice sheet grows by either freezing the water below, on the lower surface of the sheet, or by growing between two sheets of ice and eventually joining them together. The sun and warmer temperatures can eventually cause the sea ice to thin, which causes the spring ice break up period (see Figure 6) (Environment and Climate Change Canada, 2013). The amount of time that sea and lake ice persists varies yearly throughout Labrador. For example, Figure 7 shows the length of the ice crossing season across different years for the community of Mud Lake. Because of its importance for transportation, physical and mental well-being, leisure (see Figure 8) and subsistence hunting, sea and lake ice has significant cultural and spiritual meaning for those living in Labrador.

Ice can also be found in Labrador hidden in layers within the snow pack. There are many different events that can lead to the formation of ice layers within or at the bottom of the snow pack such as early winter and spring daily freezing and thawing cycles, winter thaw, rain on snow and freezing rain events. The presence of these ice layers can affect ground temperatures, vegetation and grazing animals (Brown et al., 2012). Caribou, for example, can have difficulty reaching the vegetation below the snow for grazing if there are too many hard ice layers within or at the base of the snowpack (AMAP, 2012).

Icebergs (mishta-mishkumi in Innu-aimun (Mailhot et al., 2013) and piKalujak in Inuttitut (Labrador Virtual Museum, 2004)) are fragments of frozen freshwater that have broken off from ice shelves or glaciers and landed in the ocean. The icebergs seen in Labrador come from glaciers in western Greenland and the Canadian High Arctic. Icebergs can be found along Iceberg Alley, which extends along the coast of Labrador and the southeast coast of Newfoundland (e.g. Figure 9). Some popular areas for iceberg viewing in Labrador include St. Lewis, Battle Harbour, Red Bay, and Point Amour. You can use the Iceberg Finder Map before heading out for an iceberg viewing trip to help you find the best ’bergs (Newfoundland and Labrador Tourism, 2018)!

Finally, while technically, ice cream may not contain “ice” by its strict definition (unless it is suffering from severe freezer burn), it is one delicious form of ice that can be found in Labrador during the summer months. D’s Landing (see Figure 10) and A&W in Happy Valley-Goose Bay, Strickland’s Convenience in Churchill Falls, Red Roof Convenience in Port Hope Simpson, North Side Motel Pub in Cartwright, and Tobin’s Convenience and Lakeside Convenience in Labrador City are all examples of venues which offer summer ice cream treats - Yum! 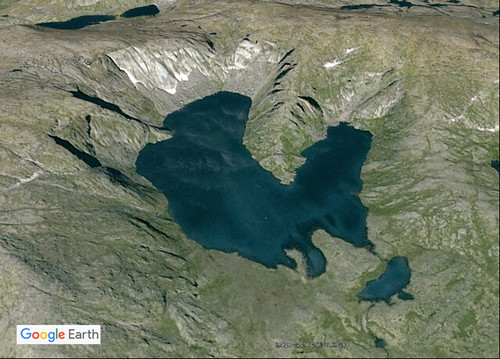