The Canada goose is a large species of waterfowl native to North America, including Labrador where it commonly breeds. Geese breeding in Labrador are thought to belong to the North Atlantic Population which overwinters from Nova Scotia to southern New England. There is annual variation in the timing of spring migration; in central Labrador, the first geese typically arrive by early May and depart by mid-October to early November. The timing of spring and fall migration can vary based on annual climate conditions. Within Labrador, latitude and region (coast versus inland) can influence the timing of migration patterns.

The first phase of migration is known as spring staging. During this period geese use the first areas of open water (inlet and outlets of lakes and rivers and natural spring areas), as they wait for nesting habitat to thaw. These areas of first open water are referred to as Ashkui by the Innu. During this spring staging phase, geese may form large flocks as they are limited to areas not covered by snow and ice.

Locally a gaggle (flock) of geese are referred to as a “company.” Geese can be easier to hunt during this spring period when they congregate in these limited spaces of open water, though hunters must be wary of bad ice and limited camouflage. Goose hunting in the spring can be done using a canoe. Usually the hunter will dress in white with a white "fly" on the front of the canoe to mimic ice pans and allow for a closer approach and subsequent shot.

As spring progresses and the land begins to thaw, geese start to form breeding pairs and leave staging areas to find suitable nest sites on islands and wetlands, which seem to be chosen to limit exposure to mammalian predators. Geese typically lay four eggs per nest, but two to five eggs are also common. Egging, the traditional practice of collecting eggs for food use by people, occurs at this time, but because of the preferred nesting sites (often occurring on wetlands), goose eggs are typically less accessible than those of many other species (gulls, terns, etc.) though this varies by region (coast versus inland). Foxes and bird species such as ravens and owls are other types of nest predators that geese must be wary of when choosing a nest site and while incubating eggs to hatch.

Geese are considered good eating by Indigenous groups in Labrador and are actively hunted in both the spring and the fall. Food types can affect the taste of geese. For example, northward migrating geese who have spent the winter grazing on farm lands to the south taste different than fall geese who have eaten wild foods throughout the summer. In Labrador, geese typically eat terrestrial and aquatic vegetation such as grasses and roots and in the late summer and fall they often add berries to their diet. These include blueberries (Vaccinium spp.) and blackberries (Empetrum nigra), and to a lesser extent other berry types.
Goose hunting in Labrador can be both an art form and a science, as hunters must account for numerous factors in order to be successful. In coastal regions, hunting is affected by tidal conditions, where low tides allow geese to feed further from shore, making them difficult to shoot with a shotgun. In the fall, geese tend to aggregate in flocks of various sizes. As flock size increases, the number of geese able to be on active lookout for predators also increases. Due to their extreme vigilance, windy or dull days are preferred hunting conditions, since wind will hide the noise made by hunters and will also cause vegetation to move, masking hunters’ movement through the grass and bush. Therefore, on any given day the hunting window can be extremely limited or nonexistent depending on weather and tidal conditions. Natural blinds (gages) are occasionally used by some hunters, but often goose hunting in Labrador is active (stalking) rather than passive (hunting from blinds).

Goose wings are often used as small hand brooms by local people throughout the region and their gizzard is considered a delicacy. Geese are enjoyed as part of festive meals in Labrador and continue to be an important part of a traditional diet. 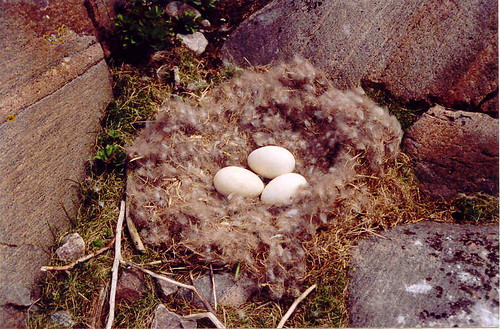