What has the devil been doing in Labrador?

Considering all the places he has left his name, (Devil’s Armchair, Devil’s Lookout, and the Devil’s Shelf, to list a few) his visits have been frequent, but the one that may make you feel the presence of that gentleman most closely is the terrifying Devil’s Hole.

If you decide to take a journey on one of Labrador’s most famous rivers (the Grand/Churchill/Mistashipu), experienced travellers will warn you to watch out for the Devil’s Hole, located where the upper and lower Moonie Rapids meet. On a ten-day trip down the river, the Devil’s Hole appears on day five, a product of the action of the water and the boulders underneath.

This treacherous place in the river has been regarded warily for generations by those who know the perils of being drawn into a whirlpool. Old time trapper Harvey Goudie spoke with confidence of running rapids, but the Devil’s Hole is another story: “The Devil’s Hole is awful for whirlpools. You got to be right careful and keep right on the north side. On the right is only a narrow strip, very narrow, and you got to keep right on that.” (Them Days 4:3.28 in Fitzhugh 403) Travellers have explained that this narrow margin for passing is what makes it necessary to be cautious; you can’t see it coming and can’t walk on shore alongside that point in the river to avoid it.

Mina Campbell described it this way, “It’s a whirlpool on the Grand River. It was a feared place to pass because you have to go close to it while paddling the river. I remember when I paddled down and being so fearful of that place because of the stories my uncle and others told me about it.”

Mina’s travelling companion Elizabeth Penashue offered up a special morning prayer before they left to pass Utshiniskushu, the whirlpool, and further protected their canoe by instructing Mina to toss sweet grass and tobacco into the water as they paddled. She was so happy when they had safely passed the Devil’s Hole that she and Mina danced on the next beach!

It seems the Devil has been at work constructing perilous places in many parts of Labrador, not to mention other locations. Adventure writers Jerry Kobalenko and J.B. MacKinnon travelled on snowshoes from Goose Bay to St. Augustine, and one of the most troublesome parts of that challenging journey was another Devil’s Hole, on the St. Augustine River. Another of the same name is to be found near the Pearly Gates close to Nain, and yet another near Fort Amherst in St. John’s.

Why has the Prince of Darkness left his mark in so many places? Folklorist Tara Simmonds has studied the appearance of this sinister gentleman in the actual names of certain communities (Devil’s Cove, for example) and in these cases the communities have often chosen to change the name, distancing themselves from the idea that they have had some kind of relationship with a figure who represents the darker inclinations of the human soul.

Other references to the Devil are attached to physical landscape features, and those have persisted. In particular, dangerous waterways continue to be known as Devil’s Cove, Devil’s Brook and of course Labrador’s own Devil’s Hole. These names act as a kind of shorthand to warn people of the danger in approaching such a waterway. The circulation of harrowing stories about near escapes from peril helps protect travellers from rash behaviour (Simmonds 25).

Over time, even the Devil’s handiwork can undergo change. People who knew the Grand River in the days before the upper stretch of the river was dammed assure us that the whirlpool is much less treacherous than before. Joe Goudie travelled the river with his older brother Horace, who pointed out where the old water level marks indicated a drop of fourteen feet after the dam was built. Still, it’s a devil of a place to travel, and though no lives have been lost there in living memory, enough near-misses have taken place to let this boiling cauldron of water deserve its name of Devil’s Hole!

Fitzhugh, Lynn. 1999. The Labradorians: Voices from the Land of Cain. St. John’s: Breakwater.

Many thanks to Mina Campbell, who suggested this entry and shared her memories and pictures, and to Elizabeth Penashue and Joe Goudie who also kindly allowed me to record their experiences. 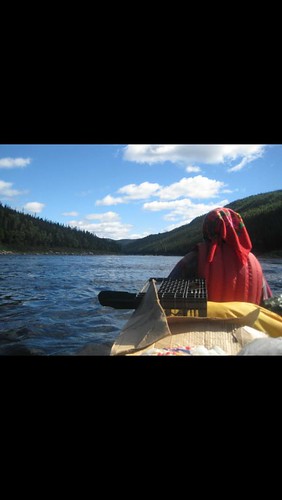