Population Growth and the Expansion of Harlow

The plan for Harlow called for an initial population target of 60,000, recognizing that natural growth would increase that over time. It was intended that the first residents would come from the bomb-damaged, east-end London boroughs of Edmonton, Tottenham and Walthamstow. Many of the first residents were, as expected, young couples, and the prevalence of babies in early Harlow was so striking that it was commonly referred to as ‘pram town’. However, by the 1980s the age profile had normalized.

However, almost as soon as the New Town program was launched, the government decided that the initial target populations were too low.  Gibberd’s plan was deemed to have provided an ‘overgenerous allocation of open space’, and the target population was raised to 80,000 in 1952. The residents of Old Harlow and its surrounding villages have continued a fight against increases in population and the inevitable pressure to expand the town’s footprint ever since the announcement of the designation of the site as a New Town. A decade-long effort by the Development Corporation to expand the town boundaries to provide sufficient housing for the second generation came to naught in 1974 in the face of vigorous opposition from the surrounding councils. 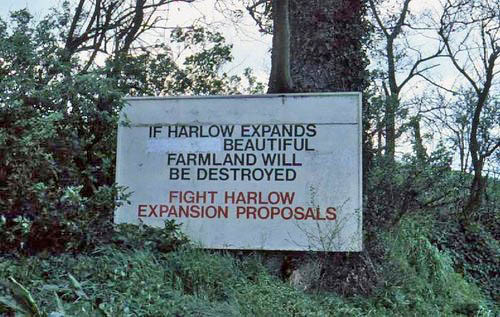 The growth was accommodated in new neighbourhoods on the eastern borders of the original New Town area. Church Langley, developed between 1986 and 2001, added 3,500 homes. The first phase of New Hall, completed in 2009, contains 500 houses, with another 2,300 to come. The developers contend that the design of the project was influenced by Gibberd’s principles, and that it will eventually be a complete neighbourhood with a primary school, doctor’s surgery and retail units at it heart, serving 6,000 residents. It is hoped that what the developers describe as an ‘easily negotiated’ street pattern, and extensive cycle tracks, will encourage residents to get out of their cars when they access the neighbourhood amenities. No house will be farther than 65 yards from a ‘green space’, and about 40 per cent of the entire area has been set aside for parks and a wildlife reserve. Stringent design controls are imposed on all the individual schemes within Newhall, although architects have been given a lot of freedom to express new ideas and this neighbourhood looks completely different than all previous developments. Prices for detached houses range from £400,000 to £750,000.

The most recent new development is much less distinctive in terms of the design of its houses. After more than a decade of bitter opposition, the Government approved the development of a large area of farmland east of Old Harlow, along Marsh Lane, on the doorstep of the Gibberd Garden. After years of acrimonious debate, the Harlow Council rejected the proposal in 2012, but its decision was overturned by the Secretary of State for Local Government and development began in 2018. The plans call for the construction of 1,200 homes, a primary school, and business and retail units. The houses in Gilden Park are being developed by a variety of large-scale building firms and, so far, are not indistinguishable from most other new houses being built in the area at present. Approval of the development requires the completion of approximate 50 ‘affordable’ homes, but the majority are very expensive by Canadian standards. A one-bedroom flat will cost £200,000 and a 3 or 4 bedroom semi-detached house about £560,000 (just over $1 million CDN in 2019). 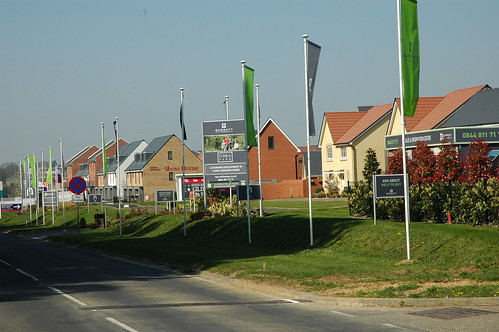 It is worth noting that in spite of the price of new houses in Harlow generally, it does continue to preserve an important part of the policy that led to its inception, which was to provide housing for families who couldn’t afford market rents. The Census of 2011 indicates that at 26.9 percent, Harlow has the second-highest proportion of social housing in England.

The pressure on housing in south-east England is relentless, especially for towns like Harlow which lie within the daily commutershed of London. Harlow, as we have seen, was one of the first-generation New Towns, designed specifically to house ‘overspill’ population from London. A current controversy accuses some of the local councils within Greater London of continuing to ‘decant’ (using the 1950s term) parts of their population to outlying towns like Harlow and Crawley. The particular problem arises because of a decision made by the UK Government in May 2013 that office buildings could be converted to housing units without planning permission, under so-called ‘permitted development rights’. Since urban development in England is much more tightly controlled than in Canada, this was a surprising decision. Harlow has been particularly affected by this policy. By March 2019, thirteen office blocks in the town have been converted to residential use and now contain more than 1,000 flats. While that sounds like a good idea in a country that cannot keep up with the demand for more housing, it has been subject top severe criticism.  Many of these flats are very small, one might easily say tiny, and the majority are located in areas originally intended only for industrial and commercial uses, so they lack ready access to public transportation, schools, health services and shops. National space standards require a minimum floor area for a new one-bedroom, one-person home of 37 square metres. Some of the flats in Templefields House, according to planning documents, have as little as 18 square metres.

The flashpoint in Harlow, because of its central location, is Terminus House. This, the first high-rise (9 storey) office block in Harlow, and its attached multi-storey car park, was built in 1968 on the east side of the Town Centre, next to the bus station. This was an ideal location for commercial offices. It is less than ideal for families, many of whom are considered vulnerable, and who are now forced by circumstances and government policy to live in what is euphemistically referred to as an ‘out–of-area’ location. Both the local and national governments have been criticized for placing 'vulnerable' families in facilities that many observers consider less than idea.

Harlow Council has objected to the fact that other local councils have housed some of their homeless residents in Harlow. Many towns, and London borough in particular, face major housing crises, partly as a result of the Tory government's placing of caps on Local Housing Allowances, and partly because of ill-thought-out permitted development rights. Harlow argues that out-of-borough placements place an unfair additional burden on other town's already overstretched social services. A significant victory was won in September 2019 when Enfield Council announced that it would no longer place any of its residents in Harlow units. Furthermore it will actively work to begin a phased return of those already moved over a six month period so they can return to their own local support networks. The two councils will join forces to campaign for changes in Government policy to end the 'right to buy' campaign, through which tenants in Council houses are permitted to buy them; life the Local Housing Allowance cap; repeal Permitted Development rights; and press for the initiation of a massive program of Council House building. In November 2019 Harlow Council announced that two more Councils,  Havering and Three Rivers Council in Rickmansworth had also agreed to stop placing homeless residents from their districts into converted office blocks in Harlow. Negotiations on the same type of agreement were ongoing with Lewisham, Broxbourne and Epping Councils.

The recent conversion of Terminus House to residential use led to a proposal in May, 2019 to build 183 flats, in a building that will be somewhere between nine and thirteen storeys in height depending on planning permission, south of Terminus House. If approved, the Crown Gate Place project would be completed by 2021, and would require the demolition of about half of the multi-storey car park. The flats would be a mixture of private, shared-ownership, and 'affordable' rental units with public space on the ground floor. 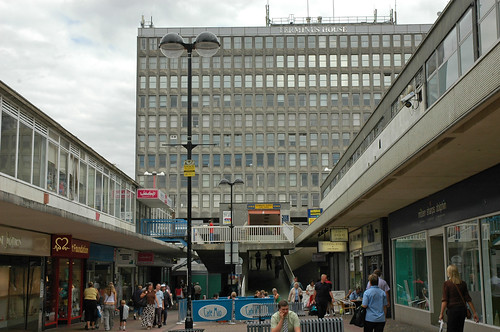 There is at least one more major development in Harlow's future. In January 2017, the Ministry of Homes, Communities and Local Government approved a joint request from the East Herts District Council, Harlow District Council and the Epping Forest District Council for an infrastructure grant to permit the development of a project called the Harlow and Gilston Garden Town. In the face of implacable opposition that was eventually disregarded, the proposal has been defended with the usual sort of extravagant hyperbole: ‘The pioneering New Town of Gibberd and Kao will grow into a Garden Town of enterprise, health and sculpture at the heart of the UK Innovation Corridor. Harlow and Gilston will be a joyful place to live with sociable streets and green spaces; high quality homes connected to fibre optic broadband; local centres accessible by walking and cycling; and innovative, affordable public transport. It will set the agenda for sustainable living. It will be adaptable, sustainable, healthy and innovative.’

In October 2018 the East Herts District Council unanimously adopted a long-range plan that includes the Garden Town. The Hertfordshire part of the Garden Town will be self-sufficient so as not to place any additional burden on Harlow. It will contain 7 villages in an area now designated as part of the green belt surrounding Harlow. The argument in favour of permitting urban development is that, on the one hand, there is a pressing need for more housing and employment to support the economic regeneration of Harlow, and on the other that 60 percent of the development area will be left as green space. The publicity is very reminiscent of that used to justify the creation of Harlow in 1947. The significant difference is that with the exception of £500 million in government funding for infrastructure, the rest of the development is a private-sector, for-profit endeavour. When completed it will contain 10,000 new dwellings and all the necessary services. 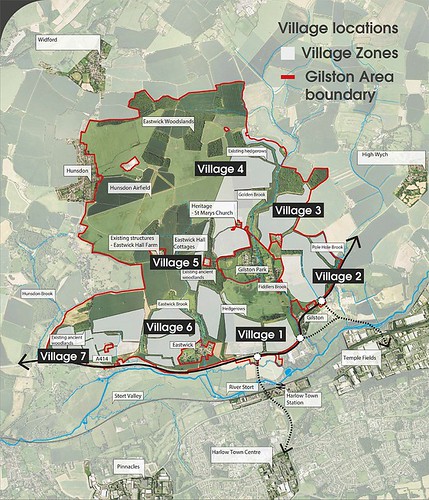 The first planning application has now been received.  In June 2019, Harlow Council received an outline application from Places for People that would see a residential-led, mixed use development of up to 8,500 homes on Gilston Park Estate. The Leader of Harlow Council described this as a significant milesone in the project that foretells an exciting time for Harlow. He promised that when the project is complete, Harlow residents would enjoy better transport services, employment opportunities, and a revived Town Centre, none of which would not occur in the absence of housing growth.