For any of the new students who’ve come to MUNL this fall – welcome! When I was in your place a few years ago, I was overwhelmed with the novelty of a new city, new province, new neighbourhood, and new social circles. And this was all before any signs of a pandemic. So I can only imagine how much harder that all is now. But for those of you who also have dietary restrictions, this is one area where I might be able to help with the transition.

Coming from Ontario, with its not-undeserved reputation for thinking it’s the centre of the universe, my knowledge of Newfoundland culture and cuisine was limited to cod tongue, fish & chips, and Jiggs’ dinner. Seeing as I’ve been a vegetarian for over a decade and a vegan for the past three, I was a little concerned about these options. Almost every restaurant has a few veggie options now. (Looking at you, Beyond Burger, in every fast food chain). But, looking to support local and independent businesses, I was worried I’d be out of luck unless fish was back on the menu for me. To my pleasant surprise, the food scene in St. John’s has plenty of places with truly excellent plant-based food.

So, if you’re also looking for that sweet, sweet plant-based fix, here’s a non-exhaustive list of some independent establishments in and around the city (in no particular order): Poyo and the Sprout

This was the first place I discovered when I moved here and googled “vegan food St. John’s,” and it’s been on my list since. Excellent sandwiches, curries, and wraps, and a Pad Thai that’s so good that it’s a favourite of several of my carnivorous friends. This one isn’t an individual place so much as a collection of businesses, seeing as there are stands from a bunch of different vendors there. But, there’s always something good at the market. Come for the produce, stay for the Ethiopian, Thai, or unreal sandwiches from Crumb & Pickle. I mean, does it get any more granola-vegan-hippie than a farmer’s market? I think not. The number of times I have ordered their cauliflower wings through Doordash (when I am too lazy to leave my house) is, honestly, pretty embarrassing. Especially considering it’s less than a ten-minute walk from my house. Pro tip: the brunch menu is really where it’s at. Vegan eggs Benedict! I don’t even understand how that works, but I am very glad it exists. A combination nursery-café, with an abundance of vegan options? Peak millennial culture. Every time I’ve been, there’s something new on the menu. And, it doesn’t get much better than taking a drive out there with friends on a nice weekend to devour all the baked goods I can find. If you’re looking for something a little more upscale, with excellent cocktails in addition to gourmet meals, look no further. It’s not in my budget to go here every week, but it’s my first choice for a special occasion. I think this place is the sleeper hit of the veggie food scene in town. (Or, I’m just super late to the party.) I first tried it only a few months ago, and I’m kicking myself for taking this long. The lack of online ordering held me back for far too long before I just got over myself and made a phone call. Yes, I refuse to talk to strangers over the phone. It’s called anxiety, but it was so beyond worth it. The owner is just one of the friendliest people I’ve ever met, and everything on the pan-Asian menu is delicious. When even my meat-eating friends are obsessed with the faux -duck and fried rice, you know it’s not just “good for a vegan place.” If you only go to one of the places on this list, make it this one.

I’m sure I’ve missed some establishments here. It’s also pretty focused on the downtown area. Thanks to my not owning a vehicle, I’ve not been able to explore the surrounding area as much. So, if you’ve got any suggestions that I left off here, hit me up on Twitter @jackghendrix – I’m always looking for more reasons to not make dinner tonight. 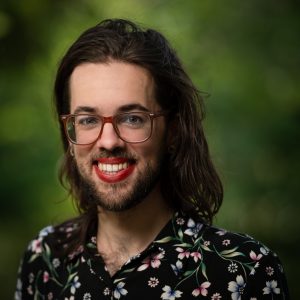 Jack Hendrix (they/them/theirs) is from Guelph, Ontario, Canada and is completing a PhD in Cognitive and Behavioural Ecology.