The Importance of Mentorship… Hey everyone! Welcome to the 2016-2017 graduate student blog. I’m happy to be one of the returning student bloggers, and I hope that my story will continue to provide you with some helpful insights into what the second year of a master’s program is like at Memorial. As you know, the School of Graduate Studies has also recruited a great line-up of new student bloggers. They all represent a variety of different academic departments and will surely have some unique experiences of their own to share. When I met with the new crew on picture day, they were all really cool and I’m looking forward to reading about their take on graduate life at Memorial University. Here’s to another great year!

In order to continue my story, I suppose that I should give a quick update, since my last entry was back in July. Actually, it’s not much of an update at all really, as the remaining summer months were mainly spent working on thesis research, and enjoying any of the sunny days that the Summer brought to St. John’s. Although, I was afforded an interesting break from academia back in August, when I was invited to record some music for a documentary destined (hopefully) for the Toronto International Film Festival. It was great to reconnect with some of my musician friends and be creative together. Whenever you get opportunities to remove yourself from some of your academic work for a bit, take it. It might surprise you how much renewed energy and focus you’ll have when you return back to your school related tasks – even if you were up until 3am recording the night before! Other than that unique opportunity, things were pretty much as standard as one would expect graduate school to be during the summer. As soon as the Fall semester started back up, you could feel the shift in the atmosphere. I must say, I did enjoy the tranquility that the summer months brought to the Science Building, but it was as equally exciting to feel the buzz in the air when the campus was inundated with students in September.

With one academic year finishing and another beginning, it meant that there was a bit of a change in my lab’s roster. Some of my lab mates have graduated, while others moved on and have accepted positions away from Memorial’s borders. Of course, even though the lab had to say goodbye to some people, we’ve retained some great students and also welcomed some promising talent into the lab. There are often days that I feel like I just happened to be in the right place at the right time in order to become part of my lab’s team. It is a real privilege to be part of a group that shares both the academic weight and the credit of the lab’s successes, and adopts an overall collectivistic approach for achieving our goals. As students of the Psychology and Law (PAL) lab, we are all responsible for meeting the requirements of our specific programs (e.g., BSc, MSc/PhD, MAPS, or PsyD), and completing our individual research endeavours. However, we can always rely on each other for support and it’s not uncommon to see members helping out one another by being directly involved in ongoing research projects; providing feedback on class/conference presentations (i.e., written papers or oral talks); or simply just giving each other a boost of encouragement or guidance when it’s needed. Being the “new” guy in the lab (that is, the one student who completed an undergraduate degree outside of Memorial), I would often rely on my lab friends to help me with learning how things were done in the lab, at Memorial, and around St. John’s in general. In fact, to be blunt, I’ve often felt mentored by my fellow lab peers.

In particular, Kirk Luther has been a great role model for me (and I know that all of the other lab members would echo this for themselves). As students, we are obviously mentored by our professors and supervisors as we navigate through our program(s), but I think there is something special to be said for student-to-student mentorship. When I first arrived in St. John’s to find a place to live, Kirk made it a point to take time out of his schedule to meet up with me at a local café. It was such a small gesture, but as someone who didn’t know a soul in this big booming city, Kirk’s actions made me feel really welcomed in St. John’s, but especially welcomed into the lab. As time went on and I became more acquainted with the expectations of the lab and overall Master’s program, Kirk would often check in with me to see how my work was going, and almost religiously ended many of these check-ins with “Let me know if I can help you with anything”. The irony of that statement is that most people who say it are just playing the social norm role of what is expected in group settings. In other words, most people are ‘just being nice’ and rarely follow up with the act. Yet, despite having a ton of his own work to do, Kirk always made it a point to find time to assist me – and every other person in our lab – with any applications, projects, assignments, questions, or any other number of tasks that we found ourselves in. Even during the week leading up to his PhD defence, his demeanour never wavered and he still made himself available to whomever could benefit from some of his insight. In fact, he gave a guest lecture in an undergraduate course two days before his PhD defence! To say the least, I found Kirk’s story to be inspiring for my own. Here was this person who was married (with a son), working through his doctoral studies, holding an impressive academic track record both from Memorial and in other relative areas (e.g., Kirk sits on the SSHRC Programs and Quality committee), and yet, still was willing to find time to share strategic advice for achieving success to his peers. It’s no wonder that the lab gang all kept our afternoon free when we learned that Kirk would be defending his dissertation research. Supporting him at the peak of his graduate school career was a sincere pleasure. As the picture likely suggests, the lab crew and I were extremely happy to celebrate Kirk’s accomplishment of successfully defending his dissertation work. Way to go, Dr. Luther!

Kirk is just one example of the type of people you’ll come across at Memorial. If you have not done so already, I would encourage you to seek out a student-peer mentor in your life because the dividends that this sort of relationship will pay are of great benefits. Better yet, why not look for opportunities to mentor others? It could be something as simple as providing lab volunteers with opportunities to work closely with you on any one of your research projects. Providing them with feedback on their tasks will help sharpen and develop their skill set, and allow you to share important knowledge with others. Alternatively, perhaps you may consider developing a supporting relationship with one of your classmates. It doesn’t have to necessarily be a ‘mentor/mentee’ dynamic, but rather just support one another by spurring each other on toward success. Truly, mentorship provides positive outcomes for both the mentor and mentee, and the effects of such a relationship can leave a huge impact on a person. 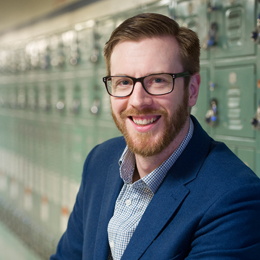