Journey to the Arctic

Day one. We loaded the boat and filled all available cabinets, cubbies, and engine rooms with enough research material to last for 5 months. The boat seems unbelievably huge right now, but I know that after a month at sea it will feel like a small home. I have the same thoughts about the crew members and scientists. There are 80 of us on board and it’s odd to think that I’ll get to know most of them. I realized I haven’t eaten in front of anyone in over a year, and let’s just say I will have to work on my table manners before dining with the captain, but other than that it feels refreshing to isolate with 80 strangers on a boat in the Arctic. Are we going to leave here still as strangers, co-workers that have spent too much time together, or lifelong friends? It was the summer of 2021, I boarded the CCGS Amundsen and embarked on a 28-day expedition from St. John’s to Baffin Bay. This trip was the second part of the 5-month journey through the Canadian Arctic. Each year the boat sets out with researchers from all over the world studying polar ecosystems. Every trip, there are different research missions and so the science becomes very diverse–it’s one of my favourite aspects. There are people studying bottom habitats (e.g. corals), ocean mapping, physical oceanography, atmospheric science, and of course – fish! For my thesis, I study contaminants in mesopelagic (twilight zone of the ocean; 200 – 900 m) fish in the Labrador Sea and the Canadian Arctic. Our group is technically called the pelagic group, which means open-ocean ecosystem, but most of the time we were called the smelly group. Not only was it because we were working with fish every night, but I think also because we would forget to shower a lot. We worked at night and after a long night on deck and in the lab sorting samples, all you want to do is sleep. And that is what we did.

Day four. The beds are actually so comfy and we even have a sink in our room, which is very impressive to me for some reason. The deckhands and the students are all on the lowest deck,  and the higher-ups are literally “higher up” on the upper levels. To be honest,  I wouldn’t want to be up there anyways because when the weather gets bad, it gets a lot rockier up there. I’ll be okay though, I’m used to waves because I grew up on boast. There’s no way I’m getting sick.

Day five. I got sick. Me *not* sick. Photo: Eugenie Jacobsen

Something that I didn’t know before I went on the trip was that even when the ship is on station sampling, the engines are never off. The times when the boat was in transit became some of my favourite times because we could sleep (and then shower if we felt like it).

Day fourteen. Today we had a BBQ on the helideck. The deckhands pulled the helicopter out of the hanger and then the chefs put the food prep inside the hanger. Life is easy right now. We have good weather, everyone’s scientific missions are being accomplished, and everyone is getting along. I have learned so much about everyone’s lives outside of the boat, their hobbies, and what they look forward to when they get back home. There is this running joke on the coast guard vessels that after months together, crew members all start talking about their basements – specifically what kind of renovations they wanted to do when they got back home. On the Amundsen, they don’t talk about their basements as much because they have new scientists each month to converse with. We were reaching the end of our research mission and the crew was in good spirits. Everyone celebrated one another on their hard work for the last month. We all shared our stories from the trip including karaoke nights, polar bear and narwhal sightings, workouts on the helideck, helicopter trips, and the many dessert and dinner favourites. You would think that food choice would be limited on an isolated ship, but with the help of three chefs and a giant cold room we ate fresh fruits, veggies, and meats all month long. My favourites were the waffle breakfasts, the french toasts, and the cookies. I have a sweet tooth. Day 28. It’s 5:17 am. We heard a new sound today – the anchor. I don’t know why but I have a hard time imagining the size of the anchor for this size of ship. It doesn’t make sense in my mind. Now that we are close to Iqaluit, I just received my first text message in a month. My garbage collection was yesterday, how nice. Everyone is scrambling to clean their rooms, pack their belongings, and put their samples in a secure place. We are have now landed in Quebec City, and have parted ways. For a whole month, I was never alone. I have never smiled and laughed more than I have on this boat. When I look at the group of 80 people, I no longer saw the strangers from 28 days before. I saw my friends. 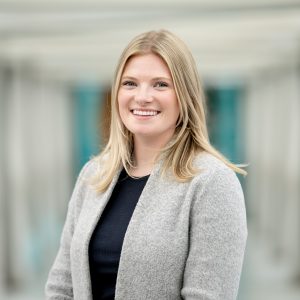 Eugenie Jacobsen (she/her) is from the Sunshine Coast, British Columbia. She is completing her MSc in Fisheries Science and Technology and studying contaminants in deep sea fish in the Arctic.