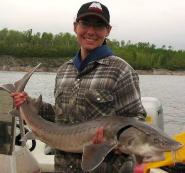 Recent animal studies have revealed that individuals within some species can differ consistently in their behavioural responses to certain situations. For example, some individuals may consistently exhibit bold behaviour by actively foraging in the presence of a potential predator while other individuals in the same situation reduce their foraging activity and remain hidden. Fixed behaviours can have fitness consequences if the individual reacts ill-adaptively to a new situation; however, can be explained at a group level if, under a variable environment (either in time or space), at least some individuals are better adapted to a particular surrounding. My research aims to (1) determine if long-lived, highly fecund fish species (e.g., sturgeon, cod) are producing offspring of variable, but consistent, behaviours as a type of “bet-hedging” life-history strategy, (2) look at the potential relationship between individual foraging behaviour and growth rate and (3) put the above results into the context of conservation practices for such species. 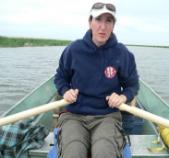 My research focuses on the role of temperature in structuring predator-prey dynamics. As fishes are ectotherms, their metabolic rates increase with temperature, resulting in increased energetic demands. In order to meet these demands, I've observed increased activity rates of small fish as temperatures increase. I'm also trying to determine through a series of experiments whether increases in temperature affect predators and prey at the same rate/in the same manner. Hungry fish take more risks to feed, but if their predators are also experiencing increased demands for food, will the prey continue to employ risky behaviour. On a larger scale, temperature and dissolved oxygen play a role in structuring community composition - my research also attempts to predict how risk may change in response to changing environmental conditions, through changes in community structure. Finally, while we generally think of predator-prey interactions in aquatic ecosystems as fish preying on fish, avian predators also consume small fish. My research focused on whether changes in the aquatic environment would affect the risk of avian predation. What I found was that there was a relationship between level of oxygen in the water and presence of tern predators - as the water became hypoxic, more terns were feeding. This is likely a result of minnows moving up in the water column to exploit areas of higher concentrations of oxygen when overall oxygen within the waterbody is low. These fish then become available to terns that plunge dive to capture prey. It is availability of prey and not number of prey that is important to the predator. 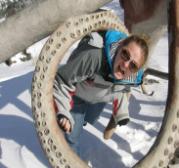 I come to the Abrahams lab after completing my B.Sc. Hons in Biology at Bishop’s University in Quebec. I then worked in the public health sector of the government for a couple of years, but was drawn back into the school life to pursue a Master’s degree in freshwater ecology. For my research, I will be focusing on the impact of turbidity on habitat choices made by small prey fish, and on detection rates between predators and prey. It is thought that, due to differences in the visual range and acuity of large piscivorous fish and small prey fish, prey are able to use turbidity as cover from their predators. I hope to determine through a variety of lab-based experiments whether this phenomenon is seen in threespine stickleback, and will also compare their use of turbidity and vegetation as cover. Finally, I will be determining quantitatively the change in the visual detection rates of trout perceiving their stickleback prey as water becomes more turbid, and the change in detection rates of stickleback spotting their trout predators. These experiments all aim to uncover some of the impacts of turbidity on predator-prey interactions in fish.w we can improve the accessibility of scientific information. 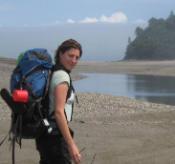 My thesis research relates to the effects of changing (or changed) resource distributions on fish behaviour and trophic interactions. For example, through sea-cage aquaculture production, we have inadvertently created spatially and temporally predicable resource patches for wild fishes, via the loss of pellet feed through net pens. Questions relating to the environmental impact of predictability in the marine environment and the spatial and temporal scale at which we can observe this variability form the basis of my project.

Beyond the scope of my thesis, I am interested in how science is communicated (and to whom), how science informs policy and decision making, and how we can improve the accessibility of scientific information.