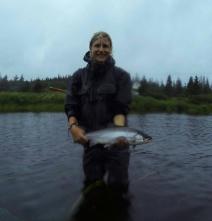 Atlantic salmon is highly valued culturally and for the subsistence and recreational fisheries it supports. Due to a high degree of variability in life history characters between and within populations, it is a good model species for understanding key questions in evolutionary biology and ecology. In recent years, their abundance has declined in several populations which has been linked to decreased marine survival. Although any causal mechanism still remains poorly understood, this has been connected to changes in the ocean thermal habitat. In accordance with changes in survival rates, changes in the demography have been observed including the increased occurrence of repeat spawning adults in some populations. These individuals typically have restricted marine migrations, remaining in near-shore environments. By combining the use of telemetry, biological sampling, and time series data, I will investigate the life history of repeat spawning salmon and how this tactic influences the temporal and spatial movements in the marine habitat. By combining acoustic telemetry and stabile isotope analysis I will also examine the feeding ecology and temporal-spatial patterns of migrating kelts (previously spawned adults) and coexisting Arctic char, a species highly adapted to colder temperatures but with a similar marine exploitation pattern to that of repeat spawning Atlantic salmon, among three systems distributed along a north-south gradient. This will allow me to investigate how the different climate regimes experienced by these populations affect the timing, temperature use and horizontal movements of their ocean migrations with the aim to quantify potential responses of salmonids fishes to climate change as affected by niche segregation and life history.

When I’m not busy studying fish, I enjoy fishing them as well as doing any other activity that involves being outdoors. 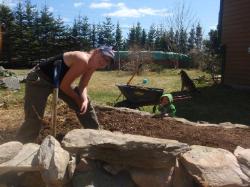 Currently, I am involved in two disparate fields of research that I find equally interesting and hope will form a component of my future scientific career.

First, as part of the science assessment team for multiple fish species, I am involved in the development and validation of fisheries assessment models and other types of population dynamics models. For Atlantic salmon, these have been applied to determine the factors limiting population size, status relative to reference levels, and potential population response relative to alternate management scenarios.

For my Ph.D. thesis, I am investigating variation in population-level vital rates (such as maturity or mortality rates) or genetic variation relative to environmental change (either natural or anthropogenic) to better understand the factors contributing to population declines in Atlantic salmon and to inform future recovery planning efforts.

My hobbies are currently focused on sandboxes, my neighbour’s chickens and Optimus Prime, but I expect that will change as my boys get older. Minutes to myself are spent in the ocean, my woodshop or my garden. 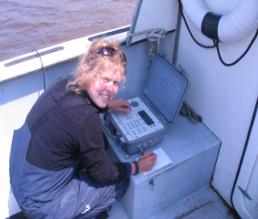 Arctic charr is the most northerly distributed freshwater fish and exhibits co-occurring anadromous and non-anadromous life history types. The species is of high cultural value to indigenous people but is also an important commercial and subsistence resource due to its high abundance and accessibility in the Arctic. Charr populations in the Arctic are still in a relatively pristine state, however, anadromous stocks are facing new challenges associated with developments such as river obstructions, pollution, or more intensive fishing practises. Most of these challenges are driven by the increased accessibility of Arctic areas due to climate change. As a result of a warming climate, species which normally occur in more southern areas are expected to extend their geographical range or become more competitive with Arctic charr. My PhD project will look at the spatial and temporal movements of estuarine and nearshore marine habitat use of Arctic charr to better understand how climate change may affect Arctic charr. By using acoustic telemetry I’ll be tracking charr at sites along the coast of Newfoundland and Labrador to determine the timing of their upstream migration, overwintering behaviour in lake systems, timing of seaward migration and their patterns of foraging behaviour in coastal waters. In addition to their movements I also hope to determine their thermal habitat use, by analysing otolith oxygen isotopes and tagging data. Finally, I will compare data obtained from Arctic charr to similar data obtained from Atlantic salmon at the same sites to better understand competitive patterns of habitat use by the two species.

If I am not chasing fish in the Arctic I enjoy sailing, mountain biking and being in the outdoors. 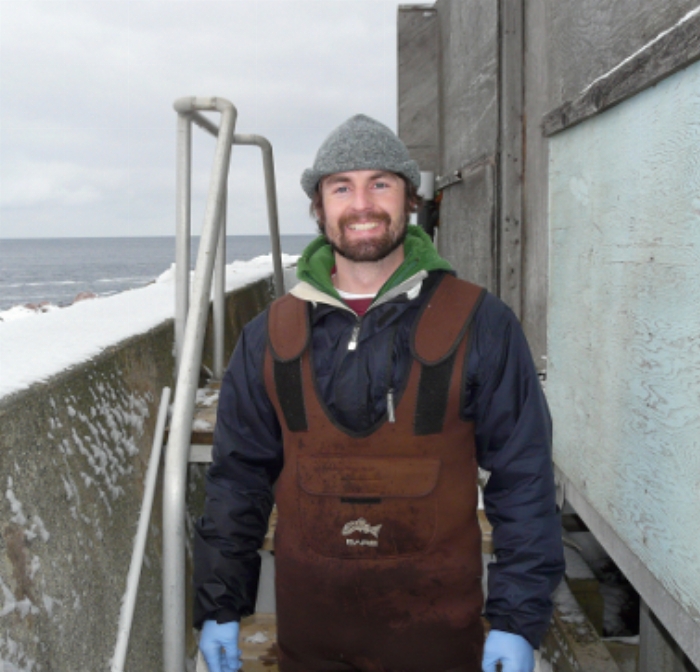 Escapes from aquaculture are nearly impossible to prevent, and given that the in the majority of cases the outcome of breeding interaction between wild and escapee fish is negative, an understanding of the potential for such iteration is imperative.

As such, I am assessing the potential for interbreeding and subsequent genetic interaction between wild and escapee Atlantic cod.

The competitive ability of individual wild and farmed males will be examined through mate choice experiments, an analysis of secondary sexual characteristics, artificial fertilization experiments (both equal and unequal numbers) and sperm quality experiments. Microsatellite DNA parentage will be employed to determine the proportion of offspring sired, and how this correlated with behavioural and morphological data from the potential sires.

I am also conducting morphometric analyses to test if Atlantic cod morphology has changed during their brief domestication in relation to their wild counterparts. And if so, has this change mirrored what has been documented in salmonids.

Finally, I have been given the opportunity to examine my own personal favourite topic: outbreeding depression. I will do so by examining the fitness of hybrids between two different populations of Atlantic cod in relation to pure-strain half-sibs reared in common gardens.

This project builds on my genetics experience gained during master’s project (University of Guelph) which used genetics and gene expression to examine somatic growth in rainbow trout.

Outside of research I enjoy being involved in sports, the outdoors and photography. 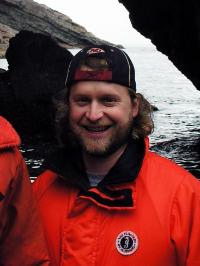 By applying contemporary evolutionary and ecological theory to the restoration of declining populations, scientists and managers can open the door to innovations in conservation. I am investigating the effects of captive breeding and inadvertent, artificial selection on the behaviour, growth, morphology and survival of endangered Atlantic salmon populations in captivity and in the wild in collaboration with Dr. Pat O'Reilly (Fisheries and Oceans Canada, Halifax). We employ wild releases, electrofishing, microsatellite-based parentage assignment, extensive pedigree and behavioural experiments to address questions directly related to the restoration of Atlantic salmon populations. This work builds on my Master's experience (University of Maine) identifying variation and local adaptation within a Distinct Population Segment of endangered Atlantic salmon in Maine. If I've learned one thing studying biology, the study of life, it's that science isn't all that life has to offer. Outside of my research, I enjoy being involved with student organizations and leadership, sports, barbecuing, fishing, paddling, camping, teaching and Scotch. 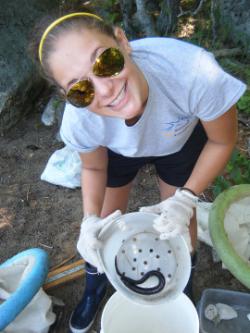 The capacity of populations to evolve quickly is central to population-scale responses to climatic change and anthropogenic stress. As such, I am characterizing the presence and magnitude of recent adaptive divergence (rapid evolution) in an introduced population of Atlantic salmon (Salmo salar) on the Avalon Peninsula of Newfoundland. This will be conducted by using genetic and experimental comparisons with the source population.

In 1984, the Salmon Association of Eastern Newfoundland implemented an enhancement project in Rocky River, the largest watershed on the peninsula (~300 km2) by stocking the river with fry in order to establish an anadromous Atlantic salmon run. The fry were taken from the broodstock of the neighbouring Little Salmonier River. Since that time, a salmon run has been established and I am researching whether the Rocky River population has experienced adaptive evolution in the 30 years post-introduction.

This will be conducted by (1) quantifying recent genetic and genomic divergence by analyzing microsatellite loci and genome-wide single nucleotide polymorphisms (SNPs) and (2) using reciprocal transplants to test experimentally whether local adaptation has arisen in the 4-5 generations since introduction. This work will explore the potential for rapid evolution in a species currently threatened or endangered throughout much of its native North American range.

When I'm not chasing after fish in a river or taking measurements in the lab, you can usually find me broadening my movie database, playing rugby, travelling, or deciding what kind of tea to try next 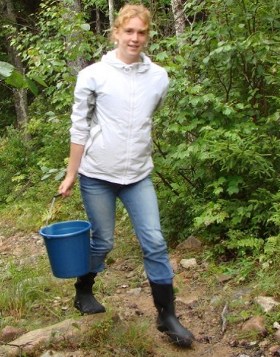 I’m studying the reproductive ecology of Atlantic salmon in the context of population restoration. Using underwater video footage and live behavioural observation data of adult salmon in a semi-natural environment, the spawning behaviour and reproductive success of fish with varying degrees of domestication are being compared. In addition, underwater video footage was used to monitor the spawning of pairs of adults with varying levels of domestication isolated in stream channels either in the absence or presence of precocious parr. The timing of the onset of spawning and the fertilization success is being compared to determine the effect of precocious parr on adult spawning. This project is in conjunction with the Mactaquac Biodiversity Facility, Department of Fisheries and Oceans, Canada.