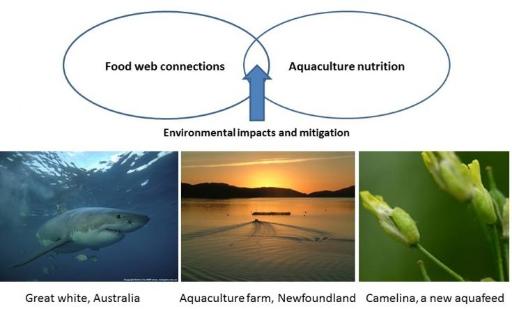 Together with many students in 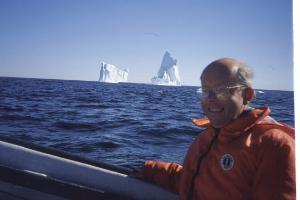 Environmental Science and Aquaculture and the departments of Biology, Chemistry and Biochemistry, we have been looking at marine ecosystems and aquaculture nutrition as well as where these two themes interact in terms of the impacts of aquaculture on the environment. In order to do this work we have also developed analytical techniques that allow us to determine the various classes of lipids and their component compounds.

We have examined the production of lipids, which provide the densest form of energy, in bays around Newfoundland and Labrador, as well as of lipid compounds which are essential for normal growth and development of marine organisms. These compounds include essential fatty acids such as omega-3 fatty acids and sterols. The sub-polar oceanographic climate zone where we sample is an area of particular interest for work with marine lipids. We observed that there were high inputs of lipids during shortperiods especially in spring and that this material seems to be very efficiently used by marine organisms. 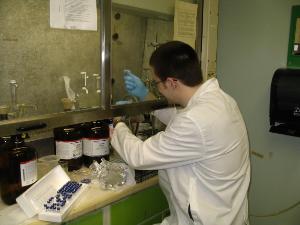 In tandem with these field experiments we discovered critical ratios of essential fatty acids that are needed for growth of early life stages of various species of cold water finfish and shellfish. These lab experiments help us interpret our field data and are important for the aquaculture industry. We have also developed the use of fatty acids and sterols as biomarkers in cold water environments, allowing us to trace the flow of marine, terrestrial and anthropogenic compounds in particles ranging from colloids to those that settle quickly.  Our results indicate that land-derived contaminants could easily become widely dispersed in this system. By examining many of the same compounds in sediment cores we have even been able to look into the past. Our data indicate the base of the local ecosystem was functioning in a similar manner now and before the groundfish fishery was at its height.

Working with colleagues in France and in Halifax we also 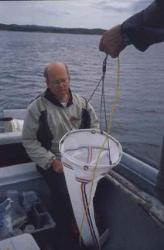 looked at the production of biomarkers and potentially toxic fatty acids in toxic algae species. More recently we have been working on the environmental effects of aquaculture and methods for their remediation. We have studied the particle field associated with finfish aquaculture and how benthic organisms interact with it near cage sites and in land-based facilities. We have shown that mussels ingest wastes being generated from aquaculture sites, and that the fraction that is removed is that which has the greatest potential to spread. This broad multi-disciplinary approach to the study of food webs, fish nutrition and aquaculture impacts led to truly interdisciplinary collaborations which culminated in my co-editing a book on food security and co-authoring three chapters in it. 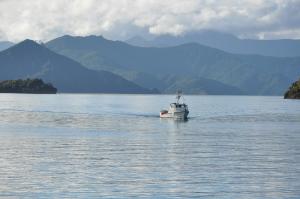 Most recently we have been examining the spatial variation in fatty acid trophic markers in tuna with colleagues in Hobart, Australia in order to identify signals of ‘tropicalization’. Signature fatty acids were used to explore trophic variations in albacore and skipjack tuna sampled from the southwestern Pacific Ocean. There were clear spatial differences in fatty acid profiles between albacore sampled in the Cora land Tasman Seas; however, few differences were observed in fatty acid profiles of albacore sampled off Tasmania and New Zealand.  The differences were likely due to differences at the base of the food web in the Tasman and Coral Seas suggesting that signature fatty acids can be used as indicators of ecosystem change.

Production, transport, fate and effects of lipids in the marine environment 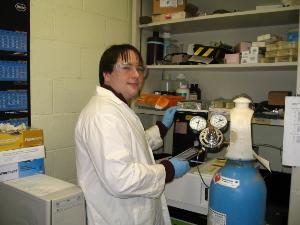 This study is all about taking it to the next level in marine food web research, both in terms of what we are studying and how we are doing it. Aquatic ecosystems occupy the largest part of the biosphere, and lipids in those systems provide the densest form of energy. Lipid dynamics can also strongly influence pollutant accumulation in marine food webs. Among the lipids, certain essential fatty acids and sterols are considered to be drivers of ecosystem health and stability. This study is a continuation of our ongoing program to investigate the importance of lipids in marine organisms and the cycling of these carbon-rich compounds in coastal ecosystems

Development of camelina as a replacement for fish meal and oil in diets for cod, salmon and trout aquaculture 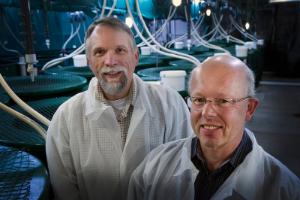 Aquaculture supplies about half of the total fish and shellfish for human consumption and the industry is now by far the major user of fishmeal and fish oil. This has led to a search for alternatives to forage fish in feeds including use of terrestrial plant based proteins and lipids. One crop that has yet to be properly tested as a substitute is camelina.

Camelina sativa is an ancient crop which has received renewed interest among agriculture researchers in Canada and elsewhere because of several unique and positive agronomic attributes. This study has determined the effect of dietary substitution of fish meal and fish oil on growth performance, feed utilization and biochemical composition in coldwater marine fish. 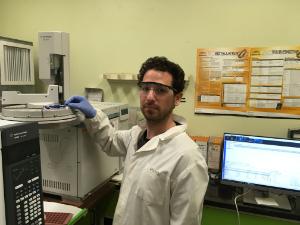 Among the lipids, certain essential fatty acids and sterols are considered to be important determinants of ecosystem health and stability. Marine lipids are also a valuable tool to measure inputs, cycling, and loss of materials. Their heterogeneous nature makes them versatile biomarkers that are widely used in marine trophic studies, often with the help of multivariate statistics, to delineate carbon cycling and transfer of materials. Integrating stable isotope data with lipid data can facilitate the interpretation of both data sets and can provide a quantitative estimate of transfer across trophic levels. We apply this approach using both bulk and compound specific isotopes in the field and in the lab. Of the lipids, fatty acids and sterols are among the most widely employed compounds because of the large number of unique structures synthesized and because of their nutritional value. In this context we have recently been investigating regional differences in essential fatty acids in marine food webs and the importance of temperature.