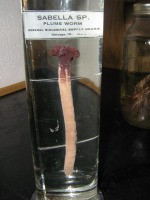 Description: They are tube dwellers, in tough, mucous tubes, coated with sand, mud and debris. Head has feather tentacles on either side of mouth. These tentacles are called radioles and form a branchial crown, which performs both feeding and respiratory functions.

Distribution: They are found mostly in shallow water, others in deep water. Locally, they reside in coralline algae.

Locomotion: Movement within the tube is usually accomplished by slow, peristaltic action of the body, or by setal movements.

Gas Exchange: The branchial crown is a specialized gas exchange structure and the internal closed, circulatory system is used for internal transport of the gases.

Reproduction: Asexual – spontaneous transverse fragmentation of the body into 2 or more groups of segments. Sexual – sexes are separate are most polychaetes release eggs and sperm directly into the water.

Interesting Facts: Regeneration occurs at both anterior and posterior ends and is controlled by neuro-endocrine secretion at the sites of re-growth. The tentacles are withdrawn into the tube in a flash if danger threatens.