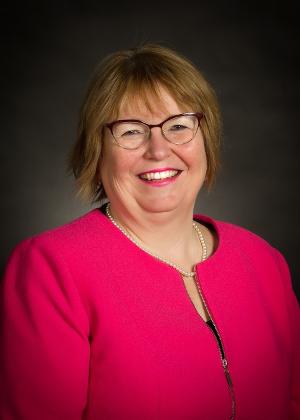 Dr. Margaret Steele is the first woman Dean of the Faculty of Medicine at Memorial University of Newfoundland. She took on this exciting role as of August 15, 2016. Dr. Steele is also a professor in the Discipline of Psychiatry.

Prior to coming to the Faculty of Medicine at Memorial University of Newfoundland, Dr. Steele was the vice dean, Hospital & Interfaculty Relations, Schulich School of Medicine & Dentistry at Western University for five years. She was also a full professor in Psychiatry, Family Medicine and Pediatrics.
Dr. Steele earned her Honours degree in Microbiology and Immunology at Western University in 1983 and completed her MD in 1987. She obtained her Fellowship in Psychiatry in 1992, and was in the first cohort to receive a Fellowship in child and adolescent psychiatry in 2013.

Dr. Steele earned a Masters of Higher Education from the Ontario Institute of Studies in Education\University of Toronto in 2002 and became a Fellow of the Hedwig van Ameringen Executive Leadership in Academic Medicine at Drexel University in Philadelphia, Pennsylvania in 2008.

Dr. Steele has been a distinguished leader in child and adolescent psychiatry in Canada. She has been the president of the Ontario Psychiatric Association, president of the Canadian Academy of Child and Adolescent Psychiatry, president of the Association of Professors in Child and Adolescent Psychiatry in Canada and a member of the Canadian Psychiatric Association Board. She led the successful application at the Royal College of Physicians and Surgeons of Canada for child and adolescent psychiatry to become a recognized subspecialty. This has resulted in the development of national standards for the discipline, while at the same time ensuring that children and youth with mental illness, and their families, would be provided with the best evidence based care.

In 2012, Dr. Steele became a Distinguished Fellow of the Canadian Psychiatric Association and in 2013 she became a Canadian Certified Physician Executive. She is also the first Canadian to be an Association of American Medical Colleges Council of Dean Fellow. In 2018, because of her contributions to research and science, Dr. Steele was elected as a Fellow of the Canadian Academy of Health Sciences and in 2019, was named Professor Emerita at The University of Western Ontario.  In May 2021, Dr. Steele was appointed as Chair of the Association of American Medical Colleges (AAMC) Council of Deans Fellowship Committee.  In April 2022, she became Chair of the Board of the Association of Faculties of Medicine in Canada.