'P' is for Partridge

What’s in a Name?

In Labrador, one generally hears about two kinds of partridge—white and spruce. The white are otherwise known as ptarmigans, and the spruce as grouse. In fact, we actually have four kinds altogether: two different ptarmigans (sometimes called brookers and barreners), and two different grouses.

“Ptarmigan” is a rather noble-sounding name. It was borrowed from Scots Gaelic, but has come to be associated with Canada’s north, much the way “bannock” has. Ptarmigans themselves are perfectly noble, too. The ptarmigan in general is recognized as our provincial game bird, while the rock ptarmigan in particular is also the official bird of Nunavut.

Bird books explain many ways to distinguish between the willow and rock ptarmigans. The classic reference work for our area is Birds of the Labrador Peninsula by Todd, but neighbouring areas have more recent, illustrated and accessible options: Birds of Nunavut by Abraham, Richards, and Gaston is brand new and beautiful, while Birds of Newfoundland by Warkentin and Newton is also attractive, and much smaller and handier. For a more local guide, watch out especially for future work on Birds of Nunatsiavut by our “J is for Jay” contributor Michelle Saunders and her collaborators at Memorial!

The main differences between the ptarmigans are that the rock ptarmigan is somewhat smaller and prefers open ground. In Newfoundland, most ptarmigans are willow ptarmigans, whereas in Nunavut, it’s the other way around. Here in Labrador, we’re in the middle, so the further north you go, and the more open the country gets, the greater the proportion of rocks to willows you are likely to find. The two birds are close cousins, and on the whole they are quite similar.

Neither ptarmigan migrates, and both cope with the winter by turning white for camouflage and relying on their characteristic feathered feet to walk on top of the snow. In these respects they are much like snowshoe hares—which is why their scientific name is Lagopus (“hare-foot”).

They eat rocks, you say? The rocks are not really eaten, of course, but ingested into the crop and later passed into the gizzard for use in grinding food, in lieu of teeth. Anyone who has prepared a partridge for supper will be familiar with the mass of tiny pebbles and broken-up twigs that spills out of the crop when it is removed. Inflating the crops from harvested partridges is always good fun. They make whimsical little balls or baubles for kids, and the optimistic can even attempt to use them as barometers (see Robin McGrath’s article in Them Days 39.1).

Of the two grouses in Labrador, the most abundant, important, and familiar one is the spruce grouse. The spruce grouse eats mainly spruce needles, as its name suggests, and as one can readily tell from the bird’s taste. Some people prefer white partridge, and some spruce—but either way, there’s really no grousing about a steaming bowl of partridge soup, especially when it’s paired with a thick-buttered slab of home-made bread at a Labrador January lunchtime.

The spruce grouse is less closely related to the ptarmigans than they are to each other, but belongs to the same sub-group of the larger pheasant family—which in turn includes diverse birds like chickens, peacocks, and Old World partridges.

On the subject of those Old World partridges, they really do test the theory that “a rose by any other name would smell as sweet.” Because as it turns out, the word “partridge” derives from an ancient Greek word meaning “fart.” The Oxford English Dictionary speculates that this might have had something to do with the sound of the birds’ wings when they take off. Who knew that we have been calling our beloved ptarmigans and grouse “fart-birds” in Greek, all along? This discovery also suggests that it might be more fun to edit a dictionary than any of us supposed.

On the other hand, Greek mythology also holds that the first partridge was the transformed Perdix, a man who was murdered by his uncle Daedalus for excessive cleverness after he invented the saw. No one with experience of spruce grouse (otherwise called “fool hens,” especially in Newfoundland) would think them especially bright!

The other grouse is rare in most of Labrador and lives mainly in the south, though perhaps climate change will gradually lead it further north. It is called the “ruffed grouse” because of the small crest on its head, like a cardinal’s. The ruffed grouse is larger than any of the other local partridges, and while it looks somewhat like them, it behaves quite differently. It is most famous for hiding in bushes or long grass until you unwittingly approach within a few feet, and then bursting out with a tremendous flapping around your head. I remember being startled out of a year of my life in exactly that fashion, as a child in small-town Ontario. Hence the saying “beat the bushes”—hunters generally flush the birds out by smacking bushes with a long stick. A very different technique than driving along the Trans-Labrador Highway with a gun and a sharp pair of eyes!

But that is far from the last word on partridges.

Innu-Aimun seems to have as many words for partridges as English does, but the general base term is “pineu,” especially for the spruce grouse—although as Roy Byrne pointed out at the Innu-Aimun language workshop at this year’s Labrador Research Forum, “pineu” also means “battery”! Ptarmigan adds an extra syllable at the beginning: “uapineu.”

In Inuttitut, the base term is “aKiggik,” meaning rock ptarmigan; and it is modified by additional endings, either to aKiggivik for willow ptarmigan or to aKiggilik for the spruce grouse—or for that matter, to aKiggiKutik for chicken! 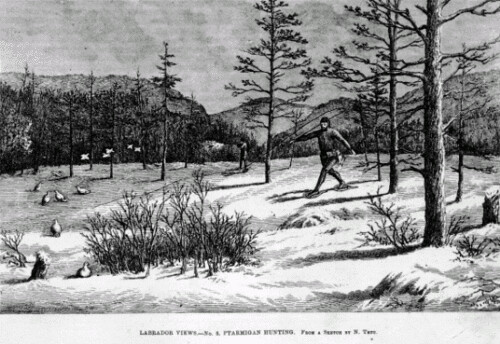