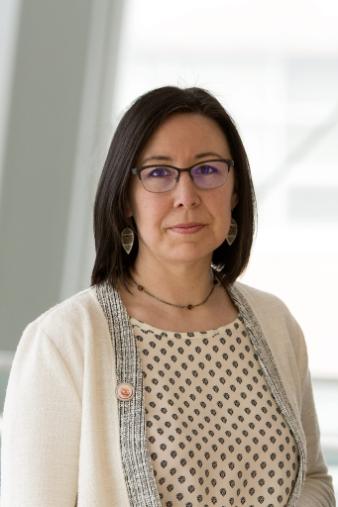 Catharyn Andersen was appointed as Memorial’s first vice-president (Indigenous) on July 1 2021. The position focuses on continuing to build meaningful relationships with Indigenous Peoples and advancing Indigenization at Memorial University. Catharyn served as Special Advisor to the President on Indigenous affairs since 2015.

As the vice-president (Indigenous) Catharyn will uphold a university-wide mandate to support Indigenous education broadly across the university, encouraging respectful engagement and relationship building with Indigenous peoples and communities, and supporting the success of Indigenous students across Memorial University. Stemming from her passion for her culture, language and beginning with her work in language revitalization, Catharyn believes that universities must create inclusive and equitable spaces for Indigenous peoples, at all levels.

Catharyn lead the development of the Strategic Framework for Indigenization, including conducting the most extensive Indigenous community consultations by Memorial University, visiting 26 Indigenous communities throughout the province, holding more than 50 university and community meetings, and working in ongoing dialogue with Indigenous Elders, communities, organizations, and governments. As vice-president (Indigenous) Catharyn is looking forward to furthering the strategic priorities identified in the framework’s 5 year timeframe from 2021 – 2026 in her continued mandate to strengthen and expand Indigenization and decolonization throughout Memorial University.

As an administrative leader, with diverse expertise in Indigenization and decolonization, Catharyn is also extensively involved in Memorial University and in the community at large, sitting on multiple councils and boards, including chairing the President’s Advisory Committee on Indigenous Affairs, sitting on the Inuit Co-Management Board for the Akami-Uapishku-KakKasuak-Mealy Mountain National Park Reserve, as well as the Board of Directors for the YWCA St. John’s and the Labrador Inuit Capital Strategy Trust.

Before coming to Memorial University, Catharyn worked with the Nunatsiavut Government, formerly the Labrador Inuit Association, in the roles of director and Inuktitut language program co-ordinator with the Torngâsok Cultural Centre in Nain, Labrador. She has also worked with the Department of Fisheries and Oceans in the Small Craft Harbours branch.

Catharyn is an Inuk from Nunatsiavut, born and raised in Labrador, with Inuit, Norwegian, English and Scottish ancestry. She holds a Bachelor of Arts in linguistics, a Master of Arts in linguistics, and a Master of Business Administration from Memorial University, as well as an International Baccalaureate diploma from Lester B. Pearson United World College of the Pacific in Victoria, B.C. She is a 2020 member of the Governor General’s Canadian Leadership Conference. In her spare time, she likes to run and loves to return home to Labrador as much as she can.