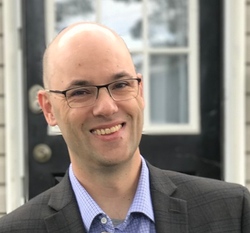 Daniel Peretti, assistant professor of folklore, came to Memorial University in 2018. He received a PhD. from Indiana University after a bachelor’s degree in literature and film from Grand Valley State University in Michigan. His research interests have evolved from studying the contexts of mythology to analyzing the ways people perform rituals that intersect with material culture and narrative as part of festivals and holiday celebrations. Much of his work also explores the transformation of popular culture into folklore, and vice versa, particularly in the medium of comic books.

What first sparked your interest in folklore?
I came to folklore because I like stories, and while I was reading a lot of mythology books I discovered I couldn’t really understand what they were about. So I took some anthropology courses in college, but it wasn’t quite what I was looking for. One of my professors told me about the folklore program at Indiana University. Mostly, though, I became a folklorist because of my father. He would tell me stories all the time. He made up a lot of them, but his love of old stories got me interested in oral tradition.

How has your own experience influenced your academic career?
It’s easy to say that most of what I study is a direct result of some earlier interest in my life. I started working on folklore and popular culture because I remembered a Superman joke a cousin told me about thirty years ago, long before I even knew folklore was an academic discipline. My work with myth, and with narrative in general, comes from growing up hearing and loving all kinds of stories. All of these aspects of my life, strangely enough, coalesced into an academic profile that seems to have fit the job that Memorial’s folklore department was looking to fill. In that respect, I’m extremely lucky.

In a different way, my experience graduating during the recession that started about twelve years ago has really shaped the way I think of my research. As a student, I thought more about ideas, but now, as terrible as it is to say this, I also think about what where my research can put me, how fundable it is, and what kinds of conversations it can contribute to. Maybe if I’d been thinking of it that way as a student….

What’s the weirdest/strangest/most surprising place you’ve ever found yourself in the course of your research?
I wish I had a better answer to this question. My research hasn’t taken me to the ends of the earth, as it has for some of my friends. When I got into folklore, I never thought I’d end up in a bowling alley in southern tip of Illinois, collecting stories about Superman.

What are you currently working on?
I am collaborating on an article on rock climbers’ home climbing walls. It’s an interdisciplinary work, combining folklore with serious leisure studies. That’s due at the end of August, and from there I’m working on a book about folklore and Superman comics that allows me to explore some ideas about narrative theory with folklore and hero myths. I hope to have that done by the end of this year. As I’m writing, I’m also setting up some fieldwork for a book about Santa Claus. That’s a big project that I expect will take several years. I hope to conduct a lot of interviews to look at Santa as both a legend and a ritual that’s especially important among different generations within families. There’s an economic aspect as well that can’t be ignored. Some of this research will involve local celebrations, and some will be in the United States.

What has been the biggest success to date for you personally?
Two amazing things have happened. First, my book Superman in Myth and Folklore was published at the end of 2017. Second, I became a member of Memorial’s folklore faculty. These two things are related, of course.

What is your philosophy in regards to research?
In a lot of ways, I’m a traditional folklorist. That means I value traditional culture for the ways it can enrich our lives. I begin with the assumption that no piece of data is unimportant, and that I have to follow the lead of the people with whom I work. So in conducting fieldwork, I let people talk. I might be interested in one thing, but if they keep returning to a specific topic, then I know what to follow up on in future research. For example, when I was interviewing people about Superman, I asked questions about specific comic books and movies and television shows, but everybody kept referring to events in their childhood, their relationships with their fathers, and religion. Essentially, I learned that to ask people why they like Superman was essentially to ask them to tell you their autobiography, so I followed that line of thinking back into library research on life history.

What sort of impact do you hope your research will have?
Since I began studying folklore in the United States, I couldn’t help but notice how many people there are interested once they find out that’s what I do but don’t really know anything about it and can’t recognize it when they see it or perform it. Even though everybody has folklore in their lives, they tend to overlook its prominence. So a big part of my research involves presenting folklore in ways that people don’t expect to find it, especially people in other disciplines.

But more than that, as I conduct fieldwork, I find myself educating the people with whom I work. As I interview people and take photographs, I feel more like I’m having a conversation about the nature of folklore and creativity than getting them to answer questions. This happens because I often have explain exactly what I do for a living before they understand what I’m asking. You can’t just ask someone what kinds of folklore they perform. So I begin by telling them a bit about what a folklorist does, and then providing them the opportunity to ask questions. And they always do ask. So I can see what they’re interested in talking about and work that into the conversation.

And that’s the impact I hope to have. I believe that an appreciation for folklore enhances people’s lives in demonstrable ways. Sometimes it’s just the knowledge that their stories are valued by researchers. Sometimes they revive practices that they’ve let slide over the years, or use our conversations as an opportunity to improve their practices, which is what happened on a small scale with some of my graduate research.

So the impact is, I hope, twofold. I want more scholars outside the discipline of folklore to learn about and employ our methods—the subject matter is already out there, being analyzed in different ways. And I want the people in general to appreciate the folklore and creativity in their own lives.

How do you feel your work is helping to boost Memorial’s national and international reputation?
Luckily, Memorial’s folklore department is very well-known within the world of folkloristics. I’m very happy to be part of that. Because they brought me there to teach subjects like folklore and popular culture, I’m working on projects that export folkloristic ideas and methods to other areas of study. Folklore and comic books is one way, and I’m pursuing that intersection because the people who are interested in comic books are often also interested in folklore, but in a nebulous way. Comics studies is a burgeoning field, and an exciting one, where the methods of folklore apply in some stimulating ways.

How is this research helping address the needs and opportunities for our province?
One of the most comforting aspects of this province is its awareness and enthusiasm for folklore. Meeting people when I first moved here last year was always great, and I mean people around town, at the bank, everywhere. When they learned what I do, they were excited one hundred percent of the time. Folklore, and especially its intersection with history, is valued here. I am tentatively planning some research in the area.

How are you supporting the next generation of researchers and HQP (highly qualified personnel)?
I like to think that I’m available and easy to talk to, and from my experience that’s very important. My first MA student is finishing her final revisions of her thesis right now, so that’s been exciting for me. I think I have a valuable perspective on the job market that I hope to impart to my students—things that can help them position themselves for specific types of jobs. The skills folklorists develop are applicable to so many different occupations that it’s interesting to see how students use them beyond their education.

What is the one thing you would like the general public to know about your research?
Mostly I’m excited when anybody knows about and is interested in my work. But if there’s one point I’d like to make, it’s that folklore is still a vital part of everybody’s life.