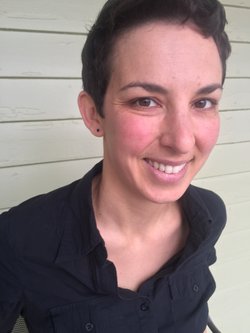 Sarah Gordon joined the Department of Folklore at Memorial in July 2017. She lived in Montreal until her teens and has spent most of her life since then moving a lot for work and school, landing in a variety of cities in the US and Canada and spending brief stints in the UK and Japan. She holds a BA (Hons.) in English and philosophy from Queen’s University, an MA in comparative literature from University College London, and a PhD in folklore from Indiana University.

Her research focuses on the creation of place through stories, especially in northern Canada. Her past research, conducted in partnership with the Déline First Nation in the Sahtú region, discussed the role of cultural tools in preserving local identity in the face of locally- and colonially-imposed pressures to assimilate to urban Canadian norms. She contributed to the Abandoned Mines Project, which studied the impacts of abandoned mines on Indigenous communities in northern Canada, and to the Social Economy Research Network of Northern Canada. Once in a while, she branches out and dabbles in writing about creepy clowns.

What first sparked your interest in folklore as a field of study?

Like many folklorists, I stumbled into the field by accident.

At the tail end of my undergraduate degree in English and philosophy, I took a course on Indigenous literature and oral tradition that completely upended everything I thought I knew about narrative. I learned about cultural relativism, and about story situated in place, in ways I’d never understood before. I began thinking about stories as the hinges that connect people to one another, and a powerful vehicle for retaining and transmitting knowledge across cultures and generations. Like many Canadians of my age and older, I grew up with an idea of Aboriginal people existing peripherally, in the past or on the outskirts of my urban life. But learning about oral traditions compelled me to completely reorient how I understood North America as a region and my own place in it.

I earned an MA in comparative literature in part because it was a field where I could shoehorn a thesis on Indigenous oral literature. Then, researching doctoral programs, I discovered folklore, an interdisciplinary field that centers oral traditions. It’s been my academic home ever since.

I’m not entirely sure how to separate my academic career from “my own experience." My academic pathway is driven by my endless love for, and fascination with, people and the stories we tell. I have always loved to travel, and to live in new places, and to learn how people live in places that are unfamiliar to me. My research has given me an excuse to meet new people—many of whom I would never have met under different circumstances—and ask them to tell me their stories. So my academic trajectory has been a natural extension of my personal interests.

What makes a place “weird”? I often think folklore studies specialize in identifying the mundane in things that seem weird, and the weird in things that seem mundane. My research up to this point has been based in the Sahtù region of the Northwest Territories, which is definitely out-of-the way for those of us who live “south,” and is different from anywhere I’d lived before.

I went to graduate school in southern Indiana and was surprised by how much I loved living there. That’s probably the “weirdest” – as in, the most unlikely – place where my research has taken me!

Up to this point, my research has focused on traditional knowledge practices, with emphasis on stories and narratives, in the the Sahtúot’ı̨ne community of Délı̨nę in the Northwest Territories. I’m interested in the cultural strategies that the people of Délı̨nę have used to confront and manage colonialism while maintaining strong social health.

I’m at a transitional point in my research trajectory at the moment—which is to be expected less than a year into a new position--working on transforming my doctoral work into a book and trying to lay the groundwork for my next project. My past research has focused on traditional knowledge and social health. I have a few ideas, but they need to be discussed and approved by the relevant communities before I can share them further. To that end, I’ll be taking an exploratory research trip later this summer.

At the risk of sounding like I’m pandering: being hired tenure-track by the Memorial folklore department is probably it. Folklore is a relatively small field, and Memorial’s department is one of its most major players on an international level. This was the dream job. I’m proud and honored to be here.

My research always begins with by establishing a relationship with a community who are interested in documenting and analyzing the kind of traditional knowledge. I value community engagement at all levels of research, from research question design, to execution, to results dissemination.

Beyond that, my research advocates for the elevation of traditional knowledge as an important interlocutor for positivist, or scientific, knowledge when debating issues of Aboriginal land management, remediation, and healing.

Funny story here: in 2016, I wrote a post on my now-largely-defunct blog, in folklore terms, on the creepy clown epidemic that was scaring people throughout North America and Europe. I wrote it for my friends, but the post gained some traction and was shared pretty widely on social media. It led to a request for an interview from an Italian lifestyle magazine – the only interview I’ve ever been asked for from a popular publication. I granted the interview, but unfortunately, never heard if anything came of it.

On a more serious note: folklore as a field has, historically, paid little attention to First Nations, Inuit, and Métis storytelling traditions. While these areas aren’t wholly absent, they have historically been peripheral, and our major conferences continue to feature few presentations that focus on North American Indigenous traditional knowledge. I hope to contribute to an important shift in the field by focusing on First Nations traditions.

I hope that as I become more established in Newfoundland, I’ll be able to build relationships with communities who would be interested in collaborating on local projects. Newfoundland and Labrador have deep, wonderful traditions of stories, music, dance, clothing, work, and more that are embraced by the people who live here. They also have deep colonial histories, and this province, along with the rest of the country, are only beginning to scrape the surface of understanding the complexity of the harm committed against the Indigenous people who live here. And we’ve done even less to understand the traditions of healing and growth that Indigenous communities have developed in response to the harm they endured. All of these traditions—the good and the bad—merit deeper understanding, independently and in interaction with one another. There’s a long tradition, here, of studying both of those things, in part because of the long history of Memorial’s folklore department. I hope that, moving forward, I’ll be able to contribute to that.

I hate to keep falling back on this, but – I haven’t been here a year yet! So my supervisory load for MA and PhD students hasn’t gotten far off the ground, though I anticipate that will begin in earnest in the upcoming academic year. I look forward to mentoring students through the process of designing ethnographic research questions and developing a plan to carry out their projects, ideally in strong collaboration with the communities with whom they hope to work.

Now that I’ve been here long enough to know my way around St. John’s, I have plans to incorporate service learning and other practical elements to my undergraduate classes as well. Folklore research requires students to be able to form relationships with strangers in order to create collaborative projects. These skills are valuable in every career path and in general citizenship.

I wish more people understood that the study of folklore isn’t a study of the past, or of purely old-fashioned things. Folklore isn’t all about the Grimms’ fairy tales, or the stories your Nan told you when you were a kid!

And it’s the Grimms’ fairy tales, and it’s your Nan’s stories. But even those conversations, in a folklore context, will focus on the meanings of those stories today.