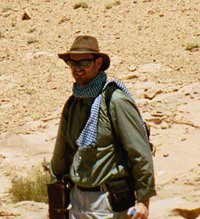 Milo Nikolic is a specialist in ancient technology. He studies water-supply systems of the Greek and Roman periods, but more recently his research is taking him towards the ancient view of water as a physical substance. He has been involved in archaeological projects in Canada, Italy, Turkey, Jordan, and Germany. He has studied in Germany, England, France, and Canada. He earned his MA in Greek and Roman Studies at the University of Calgary and his PhD at UVic. He also has undergraduate degrees in mechanical engineering from the University of Applied Sciences in Osnabrück in Germany and from Coventry Polytechnic (now Coventry University) in the UK and an MSc degree in Physics of Renewable Energies from the Carl-von-Ossietzky University in Oldenburg, Germany. He has been teaching at Memorial University since 2009 after stints as instructor at the University of Victoria, Mount Allison, and the University of Winnipeg. Before finding his home in academia he used to work for several years as a project manager in the wind-energy industry.

What first sparked your interest in classics?

There was no one single moment. As I grew up in Europe, the classical world was all around me in its structural remains as well as in everyday culture. I held my first Asterix comic in my hands when I was six years old. I used to watch TV shows retelling The Odyssey for children in the ‘70s. In school we studied the ancient Greeks and Romans in grade 7 and again, in more depth, in grade 10, so the classics have always been present in my life.

I am a wanderer between disciplines and cultures. I have experienced academia as an engineer, a scientist, and a humanist. This breadth has enabled me to bring to my classics research aspects and tools that are not native to scholarship in that field. It is quite enriching to produce material that straddles disciplinary boundaries.

It's hard to say, since a “weird” place from one point of view is a “normal” place from another. I can say, though, that I had the good fortune of visiting some truly remarkable places. The most awe inspiring were Petra and Wadi Rum in Jordan. Access to the site of Petra is on foot through a narrow, relatively long and winding gorge at the end of which lies an open space with the Khazneh, a 40-metre tall tomb carved out of the vertical rock. Seeing the Khazneh for the first time literally moved me to tears.

I am currently working, together with my friend Dr. Matt Gibbs from the University of Winnipeg, on the second edition of a first-year textbook on Roman society and culture for OUP Canada. Three of my colleagues at MUN, Drs. Allen, Maynes, and Roman are also contributing chapters to the volume.

Parallel to that I am working as a co-editor on the second edition of a sourcebook on Greek and Roman technology for Routledge. The first edition was published in 1997 by two of my mentors, Dr. John Humphrey from the University of Calgary and Dr. John P. Oleson from UVic, as well as my current collaborator and colleague Dr. Andrew Sherwood from the University of Guelph. Being able to work on the second edition of a book that I myself used as a student is something quite special for me.

I don’t really think in categories of “success” or “failure.” Opportunities open and close like doors, and depending on the circumstances, projects either come to completion, and goals are achieved, or not. An important accomplishment for me professionally was my transition, at the University of Calgary, from engineering to classics at the ripe age of 30+. I had to learn ancient Greek and Latin from scratch and walk for a second time the long and arduous path from first year to terminal degree. At UofC’s Department of Greek, Latin, and Ancient History, as it was called then, I met kind and encouraging professors and a fantastic group of fellow students with many of whom I am still in contact. I got my MA and moved on to UVic for my PhD where, once again, the circumstances were just right for me to bring the dissertation to completion. It would be presumptuous to claim it as my success because in due time the right things happen step by step. To be sure, I had to walk the walk myself, but under the right conditions it’s an exothermic process.

I am inherently curious. I want to know as much as there is to know about almost everything, so I probably belong in the tradition of the 18th-century collectors of curiosities. My heroes are Aristotle and Pliny the Elder, the latter famously dying from suffocation in the eruption of Mount Vesuvius. Pliny, in his own words, collected details on 20,000 topics by perusing 2,000 volumes. I wish I could do that, but without suffocating in volcanic fumes. My goal is to make connections among disparate fields of study and create big mosaics that are of value and interest for all fields.

I hope that my research will bring new perspectives to pressing current problems such as the supply of clean water or environmental degradation. It is ironic that I am trying to derive and communicate these new perspectives by studying material that is over 2,000 years old.

Personally, as stated above, I collaborate with colleagues from Winnipeg and Guelph as well as a colleague in Madrid. Together with my departmental colleagues, we have managed to attract excellent students from all over Canada, from Germany, and from as far afield as Africa. Two of our wonderful and enthusiastic MA students have come to us from Nigeria. In the process, they have inspired us to explore opportunities for enduring collaboration and exchange with our Classics colleagues at the University of Ibadan. People hear about us and want to work with us.

My research informs my teaching. By sharing my work with my students, I prepare them to be more thoughtful participants and contributors to the society in which they live. The opinions we form and the decisions we make are results of our previous experiences. The more experience we have, the better decision makers we become. An example: a person may think that war is a good thing. That is an opinion. That person then speaks with their grandparents who lived in 1940s Europe. As a result, the person no longer thinks that war is a good thing. That is now an informed opinion. Now imagine that you have not only your grandparents to talk to, but you can tap into the collective experience of 2,000 years of classical studies with all their high and low points. The Roman author Livy wrote that we study the ancients for the purpose of acquainting ourselves with exempla, some of which should be emulated while others should be avoided. My goal is to lay out these exempla for my students to study with the invitation to apply them to modern situations.

There is ancient precedent for almost every modern question we face. Regardless of the position one takes on a modern topic, the ancient world can help us shape an informed opinion. Want to discuss ruinous large-scale infrastructure projects? Study the correspondence between Pliny the Younger and the Roman emperor Trajan on an abandoned aqueduct project. (Trajan wrote to Pliny: “It is also part of your diligent duty to find out who is to blame for the waste of such sums of money, and whether there has been any serving of private interests in this beginning and then abandoning of the works. See that you bring to my knowledge whatever you find out.”) Want to discuss the public removal of statues and names of controversial politicians? Study the Roman practice of damnatio memoriae. Interested in a real-estate magnate with an inferiority complex who embarks on a disastrous military campaign in the Middle East? Study Marcus Licinius Crassus. (Not making this up. Read his bio in Plutarch.) The list continues on topics from sexuality and sexual orientation through views on vegetarianism to city planning and environmental degradation.

We are the ancient Greeks and Romans, and they are us, only with 2,000 years in between. Studying them from this distance makes us less emotionally invested than we are in the context of controversial modern questions. By transposing our investigation to situations from the ancient world, we remove emotional background noise and gain a more objective outlook. It tends to distill the relevant points. The students ask me, for example, why the Romans kept using lead pipes for their water supply even though they knew it was a harmful practice. I ask in return why we still smoke and use fossil fuels. By moving problems to the more level playing field of antiquity, in the absence of immediate emotional reactions, reasonable responses present themselves more clearly. At the same time, it makes it easier to understand the validity of both sides of an argument and to compromise. I believe that bringing up cohorts of students to be well-rounded and even-handed observers and decision makers is important for this province.

I strive to create opportunities for my students, just like my mentors did for me. Over the past years I have involved half a dozen students as paid research assistants in my projects. They gain valuable exposure to active research processes. It’s another line in their academic CV, and they get acknowledgment by name in the publications for their contributions.

John Lewis Paton, the first president of Memorial University College, who served from 1925 to 1933, was a classicist. The study of the Greek and Roman cultures in particular was one of the foundational pillars of Memorial. I see myself as a custodian of that early tradition, and I strive to adapt my academic work to the requirements of my students who will have to function in a modern professional environment with all its challenges. The stuff I do and teach, even though on the surface it’s “old”, will help them be better at their jobs, whether they go on to become lawyers, journalists, teachers, medical doctors, or classicists.