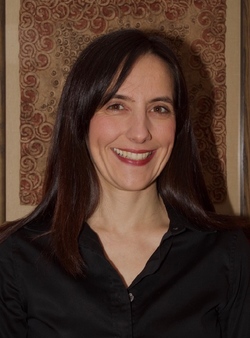 Dr. Maria Mayr is associate professor of German at Memorial. After completing an Honours BA in philosophy and religion with a minor in English literature at U of T, she pursued graduate studies at Western. She completed a PhD in comparative literature in 2010, at which point she was hired at Memorial to teach German language, literature and culture. In her research, Dr. Mayr analyzes contemporary German-language literature written by non-ethnic German authors. Currently, her SSHRC-funded research focuses on transnational European memory discourses in German-language literature by authors from Eastern Europe. She has published on transnational European memory and on a variety of German-language authors with migration background.

What first sparked your interest in German as a field of study?

The seeds for pursuing a career focused on reading and writing about literature were laid by my literature teacher in Germany. Fresh out of teacher’s college, she somewhat ambitiously made us 12-year-olds interpret Kafka. While that effectively ruined literature for some of my classmates, I was hooked. After immigrating to Canada with my family, however, I turned my back on German for a few years and—to the dismay of my more practically oriented parents—studied philosophy, religion, and English literature instead. I then went on to do my graduate work in comparative literature, which eventually brought me back to German and the field of German studies. To my great delight, I found in German studies a vibrant and multifaceted field that looks at German cultural products in their social, cultural, historical, political, and economic contexts and draws on the entire range of critical approaches that characterize the humanities and social sciences more generally.

Being a first-generation immigrant has certainly influenced what I am doing today. German-language literature by writers with a migration background really took off as an area of study during my graduate years and when I came across that body of work, it resonated with me. Issues such as living and writing in another language and probing the meaning of concepts such as home and identity came rather naturally to me given that I had been dealing with these issues myself. Even if I have since shifted gears a bit and am now working on how literature reflects and helps shape European memory and identity discourses, I continue to do so by looking at writers with a migration background, in part because issues connected to the past and questions about what shapes who we are, continue to be foregrounded in this body of work.

“Weird” is not the right term here but my research has certainly brought me to places and into situations that I have found quite unsettling – which is, overall, a good thing. Going to Croatia, for example, has been important for my thinking about literature dealing with the 1990s Balkan wars. I don’t always find it easy to read fictional and non-fictional work about this violent conflict—but being with and presenting in front of people who live with the effects of the war on a daily basis of course is something else all together.

I am currently working on a book project about how literature written by German-language writers with a background from Eastern European countries contributes to or subverts current European memory discourses. Facing issues such as the Brexit and the rise of nationalist sentiments across Europe, the European Union Parliament invests considerable hope in strengthening Europe’s unity by solidifying some kind of European identity, and this European identity is closely linked to the formation of a common European memory. What is included and excluded in this memory, which is for instance curated by the EU Parliament in the House of European History in Brussels, is of course highly politically charged. Addressing the current European crisis is therefore in large part a cultural undertaking and the humanities have a significant role to play in this.

Receiving a SSHRC grant has been really encouraging for me. Of course that is in part due to the funds and what they allow me to do. But more importantly, there is a certain validation in receiving funding for a project that exclusively looks at literature and at a foreign literature to boot. In times when it may seem that society is placing less and less value on the kind of work done in the humanities, this has been a good sign for me.

Research only makes sense if it is shared and in dialogue with other research. What I am still seeing a lot in my field, though, is that people are very protective of their findings and hesitant to share their data, which is a real shame. So the most important thing for me right now is how to make my data available to others in a reciprocal fashion and to try and work more collaboratively. In the end, ‘the more, the merrier’ really does apply here.

In a way, the kind of research I do is performative in nature: Europe is many different things to different people so that writing and talking about ‘Europe’ is what creates it in the first place. Ultimately, however, I hope that my research will contribute to making any notions of what the Europe community is, could, or should be, more diverse by drawing attention to the voices of immigrants and refugees. The achievements and blinds spots of a project such as the Europe Union are thrown into relief by a community’s outsiders and weakest members.

Like many colleagues here, I am presenting the results of my research at conferences in Europe and North America and have been invited to talk about what I do by several universities in Canada, the States, and Europe. I have also published in journals in several countries and was able to invite people to come here for a workshop or to give a talk. I think it is fair to say that Memorial is on the map for people in my field. It might help that I always have a picture of an iceberg on the last slide of my presentation...

Immigration is a central issue for Newfoundland. Teaching about my research to students – for example I am teaching a course on German literature in translation that looks at migration and the so-called refugee crisis next term— will hopefully contribute to raising awareness of the kinds of issues that are faced by newcomers to our province. I think this is an area where there is still quite a bit of work to be done here.

Through graduate supervision and by means of supporting students working in my area at other universities in Canada and abroad. For instance, I am co-supervising a PhD student in Germany and supervising MA students here, and I am always happy to talk to graduate students from anywhere about our common research interests.

It seems fair to say that we are living in difficult times right now. Whether we look south of the border or over to Europe, we are facing issues such as exclusionary nationalist sentiments and refortified borders aimed at keeping others out. These reasons for, and any potential solutions to these challenges are incredibly complex so that any attempts to meaningfully address them requires looking at all areas of life, including culture and artistic expression from both our own and other cultures.