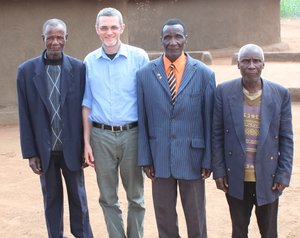 Lincoln Addison is an assistant professor in the anthropology department. An environmental anthropologist, Dr. Addison came to Memorial in 2013 after receiving a PhD from Rutgers University. His research interests include environmental anthropology, political ecology, agrarian change, development, biotechnology, labour, gender, migration and religion. He received a SSHRC Insight Development Grant in 2016 for his project “The gendered and economic consequences of land reform in Sovelel, Zimbabwe.”

Trying to answer questions can put researchers into interesting places.

In April 2017, he found himself in a resettlement area in rural Zimbabwe, helping a family harvest millet from their field.

“I was surprised by the high yields people were getting in a very dry area,” said Dr. Addison who is studying the gendered and economic impacts of land reform in the African country. “Zimbabwe’s land reform is often portrayed as a disaster, but it seems to have significantly reduced poverty.”

His work in Zimbabwe is linked to the doctoral research he did at Rutgers University on migrant labour in South Africa. At the time he spent a year on a tomato plantation, living in a worker’s compound with a group of migrants from Zimbabwe.

“It was pretty controversial and tension-filled research because I was a white person from abroad living in what was considered a ‘black’ space,” says Dr. Addison.

Many of the people he met were from Sovelele, a resettlement area that was established by the “Fast Track” land reform program in Zimbabwe. Since the early 2000s, the program has transferred 4500 formerly white-owned estates (representing 20 per cent of the total land area in the country) to approximately 140,000 black smallholder households

That area in particular was of interest because the land had originally been used for cattle farming by white ranchers and then became a conservation area to generate tourist revenue. The land was considered unfit for large-scale cultivation, although people living in the designated “black” areas on communal lands adjacent to the conservation area had practiced small-scale agriculture for many generations.

Wishing to keep a connection with the Zimbabweans he had met in South Africa and learn more about alternatives to plantation agriculture, Dr. Addison opted to focus his research on 20 households in Sovelele, specifically on whether land reform had altered divisions of labour within households and enabled women to have more control over the land.

Dr. Addison is quick to credit his friend and research assistant Blessing Musungwa (one of the migrant labourers he met in South Africa who also has a degree in anthropology) for his help in gaining access to the community of Sovelele.

“He is highly respected in the community and works as a principal in the secondary school there” says Dr. Addison. “He and I are basically doing this project together with the help of his wife Lillian who assisted me in doing interviews with women in the community.”

Dr. Addison worked the fields with the people of Sovelele, lived in a village, attended community meetings, participated in church services and carried out surveys with 20 households over a period of eight weeks.

His findings were significant.

“Because people now have much larger tracts of land, it’s better for women because they can grow a variety of crops – some of which they sell for personal income. Men work in the fields and outside the homestead but essentially women are doing most of the work on what are now medium-scale farms.”

Dr. Addison explains that women maintain each household’s grainery and are the front-line traders in the region’s barter economy, therefore exerting significant control over what is done with the crops after they are harvested.

White farmers never considered crop production in the area due to the lack of water whereas the women farmers of Sovelele are intensively farming grains such as maize, sorghum, millet and other crops such as peanuts, pumpkins and sweet potatoes despite the six-month long dry season. They are also doing much of the clearing of the land and planting without the use of motorized vehicles.

Dr. Addison feels that Zimbabwe’s land reform represents an important counter-example to those who argue that the solutions to poverty and hunger in Africa can only come from large-scale farming or the adoption of foreign technology.

“My research adds to a growing literature which shows that the redistribution of land can empower women and enable livelihoods among the rural poor,” he says.

There are still huge challenges in the community including the lack of water, bad roads, and the scarcity of health clinics.

“Imagine me there, a white person from Canada. They are asking ‘what the hell are you doing here?’” laughs Dr. Addison, adding that for many of the resettled farmers, the last white person they saw was the former white landowners. “For a lot of the young kids there I am the only white person they have ever seen. And of course the people are wondering how my research is going to help them develop their community.”

His research also looks at different marriage situations and how they contrast with the traditional way marriage was described in the communal areas.

“It’s hard to generalize about marriage anywhere – including rural Africa.”

Dr. Addison believes his research might be moving towards comparative studies of de-colonialism.

“Canada is struggling with its own colonial legacy and efforts to reconcile with Indigenous peoples,” he says. “The time is right for looking at other settler colonies and what has happened in other contexts. In some ways South Africa and Zimbabwe might be further ahead than we are in Canada about confronting their own colonial histories.”