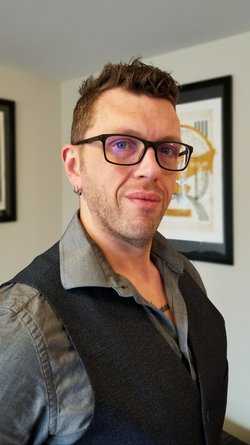 John A. Geck joined the Department of English at Memorial University in July 2015, and his campus interview was his first visit to Newfoundland. Originally from Central New York, he received his BA in English from the University of Rochester and his MA and PhD in Medieval Studies from the University of Toronto. He then completed a Mellon postdoctoral fellowship at the Pontifical Institute of Mediaeval Studies to earn the License in Mediaeval Studies, and taught sessionally at the University of Toronto and Sheridan College in medieval studies, literary and visual arts, and academic writing. Concurrently with his doctoral and postdoctoral studies, he worked at the Records of Early English Drama as a research assistant and project manager for REED’s Patrons and Performances and Fortune Theatre websites, and is currently the closing editor for the Cambridgeshire volume of records.

His work deals broadly with transmissions of high and low culture in medieval and early modern England, encompassing romance, hagiography, and drama. He also considers literary and historiographical recreations in digital and popular culture. Since arriving at Memorial, he has taught courses in Middle English language and literature, the Middle Ages on film, and first-year English.

What first sparked your interest in English as a field of study?

I always read for pleasure, and enjoyed the escape that books provide. Fantasy and science fiction were always my favourite things to read, and I got into Dungeons and Dragons and Magic: The Gathering and all other sorts of fantasy-based games in my early teens. Despite this, I didn’t connect this passion with a profession until my second year of university: before that, I thought I would study sociology or anthropology. Once I got into my first medieval lit course, however, I was hooked, though I think that the uncanniness of the medieval world to our own still lets me do some cultural analysis.

I tend to be a pretty voracious consumer of media, primarily in the form of books, television, or film, though also video games and music. A lot of my research focuses on distant and comparative reading, considering the same narrative across different manuscripts, languages, or time periods. My time at the Centre for Medieval Studies at the University of Toronto brought this same interdisciplinary rigour to my research method, and I trained in Latin, French, German; palaeography and codicology; and religion, art history, music, and drama alongside literature.

Together, these research interests and practices allow me to perform the sort of wide-ranging analysis I love most: for example, I’ve recently had an article accepted for publication in the Journal of Religion and Popular Culture that compares the fifteenth-century religious plays performed for the Feast of Corpus Christi to Paul Verhoeven’s 1987 film RoboCop.

I ended up waiting for an ambulance with a drunk stranger who had passed out, hit his head, and may or may not have had alcohol poisoning.

I was travelling around the United Kingdom, consulting manuscripts in London, Cambridge, and Oxford, and also taking pictures of a number of performance venues in those cities and in southern Wales. By the last day of the trip, I visited about a dozen opulent castles, large private manors, and grand college halls: spaces where public performance was recorded to have occurred, in all forms of repair and ruin, and ended in Pembroke Dock, after visiting a site once owned by Robert Devereux, a favourite of Elizabeth I.

Unbeknownst to me, Pembroke Dock has an unstaffed train station, so my plan to arrive hours early to buy my ticket back to London meant I was left sitting in the middle of the day, alone but for the man and woman that had come to the empty platform to drink some cider on the cheap until the pub opened. They called me over to strike up a conversation, and I ended up joining them for a midday beer at that pub. I also ended up helping to carry one of the pub’s regulars outside to wait for (in turn) a cab that wouldn’t take him home, a bus he couldn’t pay for, and eventually an ambulance to the hospital to get checked out for alcohol poisoning. He was in good shape when I left, and I successfully made my train.

I’ve got several different projects on the go right now, including two articles on medieval romance, one on multilingualism in the Alliterative Morte Arthure and the Prose Life of Alexander, and another on Passion lyric echoes in Sir Orfeo; and a critical edition of a Latin saints’ life called the Life of Amicus and Amelius (Vita amici et amelii), but my major focus is a website called Morrois, the Mapping of Romance Realms and Other Imagined Spaces (www.morrois.mun.ca).

This website collects line-by-line instances of explicit place-name references, whether they refer to actual locations, people from those locations, languages, and trade goods. The prototype site I have now shows only a limited number of romances, but I hope to expand it to cover, firstly, two critically important manuscripts (the Auchinleck manuscript and the Lincoln Thornton manuscript), and eventually to cover all extant copies of Middle English romances. The website allows users to explore a number of research questions, including the presence or interaction of the foreign in medieval Europe, the use of language in travel, and the presence or interest in luxury imports across these texts.

Aside from getting a tenure-track position in a rather competitive market (which is surely the biggest success), I think what has been most personally rewarding to me was my postdoctoral studies as the Pontifical Institute of Mediaeval Studies (www.pims.ca). My work there culminated in the production of an early version of the critical edition I’m now bringing to publication, and earned me the License in Mediaeval Studies.

One of the great defining elements of medieval romance (and medieval society more generally) is its fascination with contrary things, contradiction, and ambiguity. To study ambiguity and contradiction, medievalists always have to read widely and comparatively, and attempt to draw connections not only where they seem most obvious, but also where they may at first be hidden.

I hope that by looking at the ways in which medieval England engaged with the larger medieval world, I can contribute to a growing area of research interest in the so-called global Middle Ages, and to demonstrate to a wider audience that the medieval world was religiously and racially diverse, and fascinated with travel and other cultures.

I regularly present and publish in a number of international forums, including the Medieval Insular Romance conference (often based in the United Kingdom), and the Leeds, UK and Kalamazoo, MI International Medieval Congresses. During my graduate and postdoctoral work, as well as in my time here at Memorial, I’ve worked to develop a large network of medievalist colleagues, many of whom have expressed interest in Morrois, and whom I hope will be early testers of the site as it develops.

Both nationally and internationally, I hope to bring students to Memorial for our strong interdisciplinary program in Medieval and Early Modern Studies. At the undergraduate level, our English Honours program is exceptional, and prepares students for graduate work at other universities in Canada, the UK, and the US.

In times of economic hardship, the standard solution focuses on funding natural resource extraction and energy production, and pushing austerity for education, culture, and the humanities. Education and the humanities are not only important in their own right, as critical elements of society, but are becoming ever more necessary as culture seems to be becoming more polarized: learning to think critically and empathically about other beliefs and ideas can build bridges between groups. Finally, cultural production, broadly, is an economic area that can be developed outside of reliance on exhaustible resources.

I supervise students at both the MA and PhD level, and have also brought a number of graduate assistants on to work on Morrois. Many graduate students seek academic employment, and I help my students and supervisees submit papers for conferences and publication, observe their teaching and offer feedback, and train them in the research skills essential to academic work. Work on a digital humanities project like Morrois also trains them in a variety of skills that prepare them for para- and non-academic work, such as project management or grant writing.

Medieval Europe, and especially medieval England, are often seen as a highly insular and patriarchal Christian monoculture with no racial diversity, lacking knowledge of or interest in the world outside of Europe. This is completely false!

While women did face serious social constraints, there were also many female authors, composers, and scholars. While many people were tied to their land and lacked the freedom to travel, people in later medieval Europe also travelled to the Middle East, India, and even China. While antisemitism and Islamophobia certainly existed, as they do today, there was also interest in learning about the languages and religions of these other groups. In short, the medieval world was as complex as our world today: an unsurprising thing, given how much the medieval gave form to the modern, and how much the two are still interconnected and entwined.