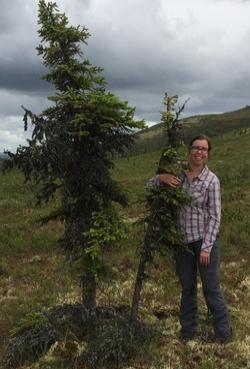 Carissa Brown is originally from Thunder Bay, Ontario, on the north shore of Lake Superior and the heart of the boreal forest. Not surprisingly, her research background has emphasized boreal forest systems, particularly at the northern and southern edges of its distribution. She joined the Department of Geography in 2013 as their resident biogeographer, following a postdoctoral fellowship at Université de Sherbrooke and degrees from Lakehead University, Carleton University, and University of Saskatchewan.

Carissa is broadly interested in plant species and communities at the edge of their range, focusing on the direct and indirect effects of climate change on species' distributions. She conducts that research in collaboration with her graduate students in northern Yukon, Nunatsiavut, and here on the island of Newfoundland

What first sparked your interest in geography as a field of study?

I became a geographer without realizing that I was one. My degrees are all in biology, with a focus on ecological research. My doctoral research took me to the treeline in northern Yukon, where I studied how fire influences treeline position and tree species distributions under ongoing climate change. My research questions focused on why trees occurred where in some locations and not elsewhere, how that had changed through time, and what physical and biological characteristics of the environment influenced those patterns. Several of my mentors had geography degrees or were faculty in geography departments, which is quite common in Arctic research. At some point, after reading yet another paper in the Journal of Biogeography that was very relevant to my work, it dawned on me that perhaps I was a biogeographer.
I love working in the geography department. The diversity of research in our hallways pushes me to think outside of my discipline, and the conversation around the espresso machine is incredibly interesting.

I grew up in Thunder Bay in northwestern Ontario surrounded by boreal forest, rocks, and big water; a place quite similar to St. John’s in many ways. I also grew up as a kid with a dad who was a forestry prof at Lakehead University, so I was very familiar with the very quirky ins and outs of academia. While I railed against being a researcher for a while (my version of rebellion was to go to school to become a physiotherapist), I came back to my true love halfway through my undergraduate degree: the forest.

My undergraduate experience particularly influenced my career and practices as a professor. I started at the University of Guelph, taking undergraduate classes with 1500 other first year students in each course. We learned from lectures and textbooks those first two years, and I was lost. Cue the change in focus from physiotherapy to ecology (and eventually biogeography), and I transferred to Lakehead University, where classes were much smaller and experiential learning was emphasized through field labs. I had some semesters where I would spend nine hours a week in field labs, in a bog identifying plants, in a burn measuring fire impacts, or in a river seine netting for juvenile sturgeon. Those experiences greatly shape the way I teach and the way I mentor students in our research group. There are different ways of learning and understanding, and I try to create a variety of ways to access the knowledge I am sharing.

I spent about nine months over the course of my PhD living in a gravel pit on the side of the Dempster Highway, Yukon, at the Arctic Circle. It didn’t seem that weird to me at the time, but others seem to think that was odd. I was working in one of the most amazing places I have ever been - sub-Arctic Yukon – on the most northerly road in Canada. There were not a lot of options for accommodations, and gravel pits are flat and open enough for a breeze to keep a few of the mosquitos at bay. Finding a good gravel pit is a skill, which I have now passed down to my graduate students.

In the Northern EDGE Lab, we really focus on the role of non-climatic factors (e.g., disturbance, substrate, biotic interactions like herbivory) play in changing the rate at which a species’ distribution responds to climate change. We combine field experiments (like excluding herbivores with using wire cages) with observational studies across species’ ranges to test multiple competing hypotheses on current constraints on expansion. We currently do this in three systems: forest-tundra transitions in northern Yukon and Nunatsiavut, temperate-boreal transitions across the island of Newfoundland, and across a global suite of alpine treeline sites, including a site in King’s Point, NL.

Fire is also a particular focus of our lab, and we have fire-related research ongoing in 1) northern Yukon, where we are looking at how tundra fires may facilitate a pulse of tree range expansion in the sub-Arctic; 2) Nunatsiavut, where we are looking at how fire may influence tree regeneration in harvested burned woods; and 2) Terra Nova National Park, where we are carbon dating buried charcoal to reconstruct the long-term fire history of the Park to inform their fire management plan (oldest piece so far is 1000 years old!).

I am very proud to have won the W.S. Cooper Award from the Ecological Society of America, for a paper I wrote in collaboration with Mark Vellend on non-climatic constraints on tree range expansion. The award had previously been given to some of my mentors and the big names in the fields of biogeography and ecology such as David Tilman (world expert on resource competition and biodiversity in ecosystem functioning), Stephen Hubbell (neutral theory), and several members of the National Academy of Science, so it was a shock and honour to win it in 2015. That paper also earned me an interview on CBC Radio’s Quirks and Quarks, which had been a career goal of mine, and for which I was more nervous than for my PhD defense!

I need to be excited about what I am researching, which is advice that I give to students thinking about graduate school: being genuinely excited and interested by what you are working on helps sustain you through more challenging times, when experiments don’t work out, reviewers are [ahem] challenging, analyses are tricky, or when you can’t breathe for the mosquitos flying in your face while doing fieldwork in the sub-Arctic. Part of that philosophy is to try and have fun with what you are doing. Mosquitos, for example, are much more tolerable when one is laughing than when one is frustrated. The same applies to reviewers.

One of the greatest current scientific challenges is predicting the biotic consequences of climate change. Species’ responses to climate change are much more variable and complex than we anticipated. I hope that my research helps explain those variable responses a little bit more, so others can better predict where species will be in the future.

I lead an international research collaboration called the Global Treeline Range Expansion Experiment, which is a globally distributed experiment at treeline testing the mechanisms contributing to treeline range expansion, or lack thereof. The latter has led to invitations to present in symposia and contribute to the Alpine Club of Canada’s “State of the Mountain” report. I also represent Memorial by presenting my research at national (e.g., Canadian Society for Ecology and Evolution) and international (e.g., Ecological Society of America) conferences and in peer-reviewed publications.

The research the Northern EDGE Lab conducts on the island is contributing to our understanding of which tree species may succeed here under ongoing climate change. The island is within the climatic tolerances of several hardwood tree species found on the mainland but were not quite able to make the leap across the Atlantic. There is potential for species that have economic importance, such as sugar maple, to do well here. We are testing what factors beyond climate might influence their ability to establish and grow in Newfoundland.

Our research in Nunatsiavut focuses on the ability of trees to reestablish after fire in “burned woods” areas that are important sources of fuel wood for communities like Nain and Postville. We are looking at whether these areas of fuel wood harvesting are regenerating at the same density as the forests were before fire, if there are fewer trees after fire, or whether the forests are expanding their distribution under climate change. The findings of our study, which is in collaboration with Luise Hermanutz in biology and researchers from University of Ottawa and Université de Montréal, will help us predict the security of fuel wood for those communities.

I value the opportunity I have as a faculty member at MUN to be a visible and accessible woman practicing science, mentoring a diversity of students. I work with an energetic and amazing research group in our Northern EDGE Lab in geography. The HQP in the lab range from Women in Science and Engineering high school science experience students, to undergraduate assistants, to MSc, PhD, and until recently, a postdoc. It is really important to me to emphasize that they are the ones pushing our research forward: collecting data in the field, leading analyses, and keeping up with current literature to interpret those findings and forward science.

The future for students obtaining post-graduate degrees is changing across disciplines; I think it is our responsibility to provide them with a foundation of knowledge and skills that they can adapt to any number of careers. Along with the traditional training in academic research, I aim to mentor students who can problem solve, communicate their ideas and opinions, and know how to make informed decisions. I have designed my research program to allow for the integration of data between student projects, fostering collaboration. By sharing data, peer reviewing each other’s proposals, analyses, and manuscripts, and actively contributing to the research program’s development and management as a team, I try and help students complete their graduate programs as competent scientists, academics, and project managers.