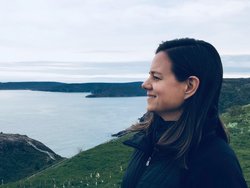 Anne Graham grew up in Ontario and spent two years living in France in her early twenties. She joined the department formerly known as the Department of French and Spanish in 2010 and defended her doctoral thesis at Queen’s University in 2011.

Her research is primarily focused on sixteenth and seventeenth century French literature. Recently, she has expanded into the area of Early Modern translations, mostly focused on cultural transfers between France and England. Theatre has been a long-standing interest, ever since she completed a fourth year honour’s paper on Samuel Beckett’s En attendant Godot. Today she spends a lot of time working on early modern biblical tragedies.

What first sparked your interest in studying French?

I attended a Francophone school from the age of 5. My love of French started then and continues today. I also lived in France for a few years in my early twenties, as an exchange student, and then as a language assistant in a high school. From then on, I knew that living and working in French would have to be an important part of my life. I had always been a big reader and so studying French literature was a good fit for me, which is not to stay that my route to becoming a professor of French was a direct one!

Even though I had developed an attachment to French at a young age, when I was deciding what to study in university, the rhetoric that “science” was somehow more important than other subjects was still floating around. Torn about what I wanted to study, I enrolled in a unique first year program at the University of Guelph, which combined the arts and the sciences. The program was called “Academia”, and in addition to taking some general first year courses in Arts and Sciences, we had some courses that were meant to demonstrate the interdependence of the disciplines. One course on artificial intelligence was a combination of computer programming, linguistics and psychology. Another course combined geology and humanities. It was a fascinating program and I still think about those courses today.

At the end of that year, I was planning to register for a Bachelor of Science, still persuaded that Science was more “useful”. Fortunately, that summer I had an epiphany while walking with a friend on a beach at Lake Huron. Even though I had not taken a single French course during that first year, I knew that I should study French. And that’s what I did!

I hesitated again before doing graduate studies, and took a short detour through law school – the path to becoming a professor was not a straight line for me like it might be for some people. I think this experience has helped me to better understand students who are also trying to figure things out during their undergraduate degree and beyond. I have had students in my class who are doing a double major in biology and French or who come to French later in life and discover that it was always meant to be. I encourage students to follow what is meaningful for them, what brings them joy, and to trust that the rest will work itself out.

I’ve spent time working in libraries in places all over the world (New York, Chicago, France, Italy, Spain), but to me that is more wonderful than weird!

I have a number of projects. In addition to some articles, I’m working on a SSHRC-funded project to publish a critical edition of a translation of an important French Renaissance play. The translation is complete; right now I’m working on the notes and the introduction. I also have a new project in the early stages, where I will be examining the notion of sacrifice in Early Modern drama. This year, I’m also beginning a three-year joint appointment with the Department of Religious Studies so I’m doing a lot of reading in that field as well. Robert Orsi gave the Henrietta Harvey Lecture last fall, sponsored by the Department of Religious Studies. I went to his talk and really loved it so I have been reading some of his work. I’m been studying literature of a religious nature for my whole career, but the discipline of religious studies is rather new to me so I’m enjoying digging into that.

This is hard to say. Getting a SSHRC grant was important since so much time goes into those applications, and that is really the only way you can fund a graduate student. At the same time, the feeling of accomplishment that comes after finishing revisions on an article has not gone away for me. Some papers are easier to write than others but I definitely feel like I’m still pushing myself in my research, so that brings a feeling of success.

Go where your curiosity leads you.

I was recently approached by a scholar I didn’t know who wanted to come to Memorial to apply for a prestigious post-doc program under my supervision. It was very gratifying to be contacted by the next generation of scholars working in my area. This tells me that my reputation as an expert in my field is growing and is obviously helping to boost Memorial’s reputation. Publications also contribute.

I have co-edited a special volume of the most important journal in my field in Canada and have published in various venues in France. I also have a book contract with a key American publisher in the field: the Arizona Center for Medieval and Renaissance Studies. The center is sponsoring some panels at the Renaissance Society of America conference that will be held in Toronto in March. I will be speaking on a panel meant to introduce a series dedicated to translated texts of the French Renaissance. The annual RSA conference is the largest gathering in the field so this will be a great opportunity to attract attention to my work and to further Memorial’s reputation.

One part of my Insight Development Grant involved workshopping the translation of the play with the assistance of local theatre professionals. Jamie Skidmore, co-investigator on the grant, was instrumental in this process. He and Ian Campbell, who was also involved in the project, are very connected to the local theatre community in St. John’s and they were able to contact actors who would be good for this project and bring them onboard.

Working with the actors and Jamie and Ian was so rewarding. Everyone gave so much attention to the translation and provided such high quality, detailed feedback that we extended the workshopping process beyond what we had originally planned. This was followed up by a staged reading at the LSPU Hall downtown that was free and open to the public. This project provided paid work for theatre professionals over several months and also provided an opportunity for members of the local theatre community to experience a play that they might not otherwise have known about.

The arts have always been vital to Newfoundland and Labrador and I’m very happy to be able to contribute to artistic creation in the province. We got some really good feedback from the audience and some people suggested we do a full staging of the play. There’s no plan to do that right now, but maybe in the future. Working with talented actors and directors is definitely something that I want to continue to do!

In a department with a very small MA programme and no easy way to grow the programme due to a lack of funding, it hasn’t been easy to be involved in graduate supervision thus far in my career. This is something I value highly, however. A SSHRC grant recently allowed me to offer competitive funding to a master’s student who is working on translation and bilingualism in contemporary Canadian theatre. I’m really enjoying the mentorship and collaboration involved in supervising an MA student. I would say that it has been one the most rewarding experiences of my professional career thus far. Another MA student will start in the Fall, if she is successful in obtaining a student visa. The postdoc application is in the very early stages, but if successful, this will be a wonderful opportunity to mentor a scholar who is in the early stages of a promising career in academia.

Storytelling is at the heart of what it means to be human. It is through storytelling to that we make sense of our own experiences and get a chance to try to understand someone else’s experience.

Research in literature is all about storytelling: What makes a good story? What is the storyteller’s goal or motivation? What is the impact on the reader or spectator? I think there are a lot of misconceptions about what literary research is and in some venues the term “literature” has even gotten a bad name, which I find quite strange! Literature is just storytelling that has come to us, eventually, through written form. Studying the kinds of stories others have told at different moments of history can help us to better understand the world and ourselves. I’m teaching a fourth year French seminar in the fall, subtitled “Blood, Sex, and Faith: Storytelling in Renaissance France”, which allows me to merge my research with teaching. I encourage students to check it out!